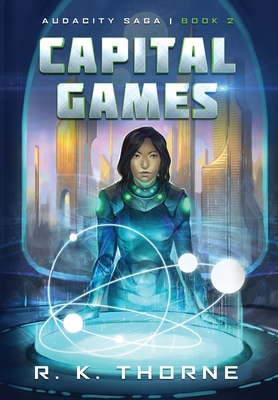 Two months have passed since Commander Ellen Ryu did the impossible and rescued mercenary Kael Sidassian-along with his mysterious cargo. Now the crew of Audacity is stronger than ever, protecting the galaxy against the abuse of technology. But after the team botches a simple humanitarian aid mission, Ryu and Kael find themselves on Capital, a neutral planet full of high fashion, decadent pleasures, and dark secrets.

Foundation scientist Chayana Persad has new tech that could help defend against Ryu's oldest enemy. But local telepaths have been vanishing, and Persad's son is missing-and somehow at the center of these crimes. As the crew searches for answers, they'll have to dodge Capital's corrupt police, allies with hidden agendas, and a traitor aboard Audacity itself. Enemies will strike, guns will fail, and the team will face some tough choices.

Can Kael, Ellen, and the crew pull closer together? Or will this decadent planet rip them forever apart?

For lovers of romantic space opera, Lois McMaster Bujold, and David Weber, CAPITAL GAMES is the second volume in the Audacity series. It's got action, adventure, and at least one pair of killer high heels.