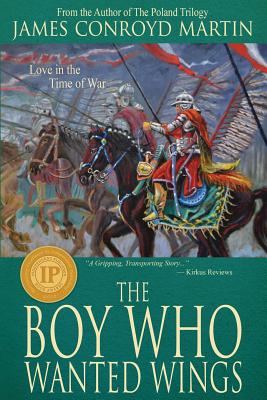 The Boy Who Wanted Wings

"A poor archer in medieval Poland takes aim at the love of his life in this epic novel from Martin. The anxious Aleksy Gazdecki, a young farmhand, embodies the ethnic and political tensions of Europe during the reign of the Ottoman Empire. The believability of this novel, which is sprinkled with period-specific details, is never in question. Martin sets the stage so tidily that the plight of Aleksy and Krystyna, who desire to move beyond the social classes that keep them apart, transcends the historical moment. Sprawling but never slow, the plot moves naturally from battle to intimacy and back again.

Aleksy, a dark-complexioned Tatar raised by a Polish peasant family, holds in his heart the wish is to become a Polish hussar, a lancer who carries into battle a device attached to his back that holds dozens of eagle feathers. As a Tatar and as a peasant, this is an unlikely quest. When he meets Krystyna, the daughter of the noble who owns the land that his parents work, he falls hopelessly in love. But even though she returns his love, race and class differences make this quest as impossible as that of becoming a hussar. Under the most harrowing and unlikely circumstances, one day Aleksy must choose between his dreams.