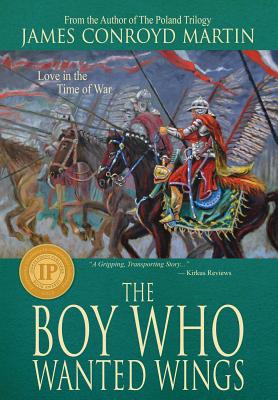 The Boy Who Wanted Wings

Aleksy, a Tatar raised by a Polish peasant family, holds in his heart the wish is to become a Polish hussar, a lancer who carries into battle a device attached to his back that holds dozens of eagle feathers. As a Tatar and as a peasant, this is an unlikely quest. When he meets Krystyna, the daughter of the noble who owns the land that his parents work, he falls hopelessly in love. But even though she returns his love, race and class differences make this quest as impossible as that of becoming a hussar. Under the most harrowing and unlikely circumstances, one day Aleksy must choose between his dreams.

"A poor archer in medieval Poland takes aim at the love of his life in this epic novel from Martin. The anxious Aleksy Gazdecki, a young farmhand, embodies the ethnic and political tensions of Europe during the reign of the Ottoman Empire. Born to a Tatar family, he was taken in by Poles and raised a Christian, living with his adoptive family under the leadership of Lord Halicki. Despite his background, Aleksy longs to showcase his talent in archery as a hussar, or soldier, in the service of King Jan Sobieski. He has an unfortunate run-in with Lord Halicki's sons and realizes that the alluring girl whom he'd seen earlier is their sister, Lady Krystyna. He and she exchange words during a chance encounter; her brothers, though, don't take kindly to him, and a fight ensues, leading Aleksy and his family to fear Lord Halicki's wrath. But after a frightening summons, they learn the Lord's mind is elsewhere, on the incoming siege of Vienna--and by extension, the rest of Christian Europe--by the Muslim Ottomans. Aleksy is assigned to a humiliating role as retainer for Krystyna's brother Roman, and he's plagued by the prospect of being unable to fight for Poland on his own or pursue Krystyna's affection. Meanwhile Krystyna tries to avoid her arranged marriage to Lord Nardolski long enough to find Aleksy again. The believability of this novel, which is sprinkled with period-specific details, is never in question. Martin sets the stage so tidily that the plight of Aleksy and Krystyna, who desire to move beyond the social classes that keep them apart, transcends the historical moment. Underneath the story of the sweethearts' labyrinthine struggle lingers the question of what it means to fight for one's country but against one's relatives--a situation in which Aleksy, as a Tatar, finds himself. Sprawling but never slow, the plot moves naturally from battle to intimacy and back again. A gripping, transporting story of self-determination set against fate." Kirkus Reviews

On the eve of September 11, 1683, a massive Muslim Ottoman horde was besieging the gates of the imperial city of Vienna and had been doing so since the previous July. Now, however, they were just hours from capturing this capital of the Holy Roman Empire. The Turks' intent was to bring Islam to all of Europe, and this city was seen by East and West alike as the gateway. With the window of time closing for Vienna, the walls were about to be breached on September 12 when the vastly outnumbered Christian coalition, led by Polish King Jan III Sobieski and his famous winged hussars, descended Kahlenberg Mountain to engage the Turks in an attempt to lift the siege. As crucial and consequential as the 1066 Battle of Hastings, the ensuing battle changed the course of European history.