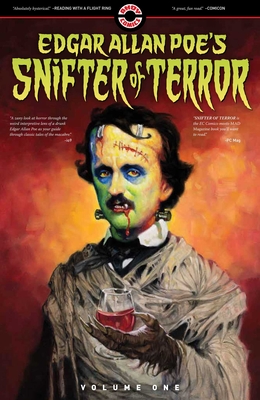 A comedic collection of Edgar Allan Poe’s sickest stories, adapted by comics’ snarkiest talents, and original stories—all introduced by Poe at his drunkest. Collecting all of the comics from the 6-issue AHOY Comics series, plus prose, a puzzle, and poetry. Introduction written by Michael Lutz.

EDGAR ALLAN POE mangles classic tales and brand new stories in this cross between Drunk History and Tales from the Crypt! A comedic collection of Edgar Allan Poe’s sickest stories, adapted by comics’ snarkiest talents, and original stories—all introduced by Poe at his drunkest. Collecting all of the comics from the 6-issue AHOY Comics series, plus prose, a puzzle, and poetry.

Snifter of Terror is the EC Comics-meets-Mad Magazine book you'll want to read.

A tantalizing new collection of frightful stories ….. It's a refreshing measure of the macabre from some of the genre's top talent, with a unique twist on the source material.

A zany look at horror through the weird interpretive lens of a drunk Edgar Allan Poe as your guide through classic tales of the macabre.
— iO9

Richard Williams' illustration work has appeared in many national magazines, most notably MAD, for whom he was the cover artist during the 1980s. He has also illustrated children’s books (The Legend of the Christmas Rose, Lewis and Clark: Explorers of the American West) and painted covers for many young adult books such as Encyclopedia Brown.

His paintings have been purchased by Steven Spielberg, George Lucas, and Howard Stern and are in the collections of the Society of Illustrators and the Library of Congress.

Richard holds a master's degree in illustration from Syracuse University.

Peter Snejbjerg draws drawings for a living and has done so for many years. He has worked for a number of American and international comic book publishers. He lives in Copenhagen, Denmark.
Loading...
or
Not Currently Available for Direct Purchase