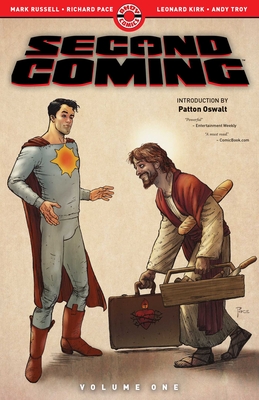 In this acclaimed, controversial graphic novel, God commands Earth’s mightiest super-hero, Sunstar, to accept Jesus as his roommate and teach him how to use power more forcefully. Jesus, shocked at the way humans have twisted his message over two millennia, vows to straighten them out.

The book everyone’s talking about, by award-winning writer Mark Russell (Snagglepuss, The Flintstones) and artist Richard Pace (Pitt, New Warriors)! God commands Earth’s mightiest super-hero, Sunstar, to accept Jesus as his roommate and teach him how to use power more forcefully. Jesus, shocked at the way humans have twisted his message over two millennia, vows to straighten them out.

Headlines aside, if you read the book, what you actually find is not a takedown of religion, but, as Russell describes it, an attempt to spread the Gospel.
— The New York Post

No one captures the lyrical disconnect between real personalities in fantasy bodies like Mark Russell. SECOND COMING is beautifully drawn and hilariously blunt. It's ribald, cranky, and warm at the same time, and it might be my new favorite thing.
— Gail Simone

While the concept itself is pretty funny, writer Mark Russell takes a sort of Terry Pratchett-esque approach to it, immersing us fully in both Heaven and 'The City' through wickedly funny character interactions...hilarious for sure.
— Newsarama

Richard Pace resides in Toronto, Canada, looking down upon the silly Americans to the south. From this perch, he has deployed his illustration skills on titles for Vertigo and Marvel and has also co-written Dale Keown’s Pitt and Batman: The Doom That Came to Gotham.

Leonard Kirk began his comic book career with Malibu Comics. He has drawn numerous titles for Marvel and DC, including Fantastic Four, Star Wars and extended collaborations with Peter David on Supergirl and X-Factor. He, wisely, lives north of the border and recently drew a revival of the Canadian comics icon Captain Canuck and a return to the post-apocalyptic world of Marvel Zombies.

Andy Troy has colored for Marvel Comics, DC Comics, Extreme Studios, and others, working on such characters as Spawn, Batman, Captain America and Iron Fist. He lives and works in Hunsville, AL, where he used to play in the metal band Diamond White.
Loading...
or
Not Currently Available for Direct Purchase