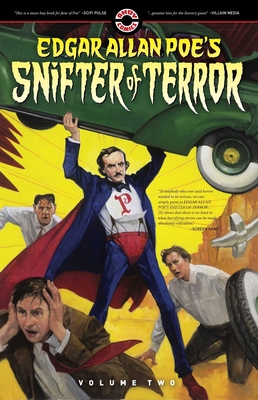 AHOY Comics’ snarky anthology-slash-desecration of Edgar Allan Poe returns for a second volume, featuring more of the popular “Monster Serials” by Mark Russell (SECOND COMING) and Peter Snejbjerg (The Books of Magic), as well as Dean Motter and Alex Ogle’s ultimate Poe mashup, “The Tell-Tale Black Cask of Usher.” Plus more than a dozen additional comics stories, a generous selection of short “Poe and the Black Cat” strips by Hunt Emerson, and horrific bonus prose stories and poetry, too.

A must-buy book for fans of Edgar Allan Poe or a good laugh.
— SciFi Pulse

For those looking for a twist on MAD Magazine that includes the input of one of America's finest writers, AHOY Comics has just the thing: EDGAR ALLAN POE'S SNIFTER OF TERROR, a comic book anthology that sees comic book writers and artists re-examine some of Poe's short stories to uncover some of today's true horrors - with a helping of satire on the side, of course.
— Hollywood Reporter

PAUL CORNELL is a writer of science fiction and fantasy in prose, comics and TV, one of only two people to be Hugo Award-nominated for all three media. He’s written Doctor Who for the BBC, Action Comics for DC, and Wolverine for Marvel. He’s won the BSFA Award for his short fiction, an Eagle Award for his comics, and shares in a Writer’s Guild Award for his television. He lives in Gloucestershire with his wife and son.

Peter Snejbjerg draws drawings for a living and has done so for many years. He has worked for a number of American and international comic book publishers. He lives in Copenhagen, Denmark.

Linda Medley has illustrated children's books for Putnam, Grosset &
Dunlap, Houghton-Mifflin, and Western Publishing. She has worked in
the comics industry since 1987 as a writer, penciller, inker, painter,
and colorist; her work can be found in everything from Justice League
to The Galactic Girl Guides. She is best known as the creator of the
Eisner Award-winning fantasy series Castle Waiting.

RICK GEARY has been a freelance cartoonist and illustrator for over 45 years. His illustrations and graphic stories have appeared in National Lampoon, MAD, The New York Times, Heavy Metal, Disney Adventures, and many other publications. His graphic novels include the biographies J. Edgar Hoover and Trotsky and the fictional murder mystery Louise Brooks: Detective. He has completed nine volumes in the series A Treasury of Victorian Murder and six volumes in A Treasury of 20th Century Murder, the latest of which is Black Dahlia.
Loading...
or
Not Currently Available for Direct Purchase