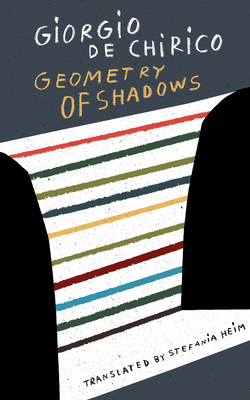 De Chirico's poems are as essential and as mysterious as his paintings.
--Jhumpa Lahiri Gathered from early twentieth-century Italian magazines, manuscripts, correspondence, television recordings, and ephemeral art volumes, Geometry of Shadows is the first comprehensive collection of Giorgio de Chirico's Italian poems, with award-winning poet Stefania Heim's English translations presented alongside the Italian originals. A multifaceted artist who lived in multiple languages, de Chirico was just becoming famous in France for the paintings that inspired surrealism when he returned to Italy in 1916 to enlist for the First World War. Quickly determined unfit for the front line, de Chirico was assigned to desk duty and began to write poems in his native language. Translating his iconic visual imagination into literary form, Geometry of Shadows is a gorgeous document celebrating the elasticity and innate potential of language, by an artist ever in pursuit of deeper understanding.

Giorgio de Chirico (1888-1978) was born in Greece to Italian parents. A gifted and prolific painter, de Chirico is considered the founder of the metaphysical school of art and a significant influence on the surrealists. Over the course of his long career, he was involved with many of the twentieth century's major art-world figures: he designed costumes for Sergei Diaghilev's Ballets Russes and set productions for Luigi Pirandello; he was photographed by Irving Penn. De Chirico was also a prolific writer. His French writing has been translated by John Ashbery, Louise Bourgeois, and others. Geometry of Shadows compiles for the first time in translation the entirety of de Chirico's Italian poems.
or
Buy Here
Copyright © 2020 American Booksellers Association