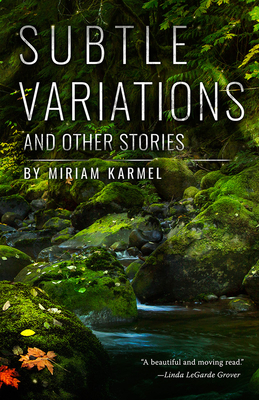 Subtle Variations and Other Stories (Paperback)

"The characters in Miriam Karmel's stories hold together the expanding, collective lives of extended family through a cherished and cared-for history of survival that is present and always heard, even when it is unspoken, incomplete, or hidden. Gently told in prose that is elegantly matter-of-fact and lovingly descriptive and detailed, Subtle Variations and Other Stories is a beautiful and moving read." --Linda LeGarde Grover, Finalist judge and author of The Dance Boots

In these loosely linked stories, characters succumb to magical thinking in their obsessive longing to direct the future, the present, and even the past. In the title story, a husband tries to convince his wife of the subtle beauty in the many shades of green in their garden, when all she wants are flowers. In other stories, characters stubbornly attempt to cheat death. A woman makes jam to resurrect a daughter killed in Iraq. A man throws a party to keep his dying wife alive. A woman believes she can rescue the past by holding onto everyday objects like pots and pans. Though these stories are filled with loss and echoing grief, they hold equal measures of gratitude and pride, resilience and joy.

Miriam Karmel is the recipient of Minnesota Monthly's Tamarack Award for her short story "The Queen of Love." She has received numerous other awards for her stories, including the Moment Magazine/Karma Foundation Short Fiction Prize. Her novel Being Esther was published by Milkweed Editions in 2013.

Miriam Karmel is author of the novel Being Esther (Milkweed Editions, 2013). She is the recipient of Minnesota Monthly's Tamarack Award for her short story, The Queen of Love. She has received numerous other prizes for short fiction, including the Waasnode Short Fiction Prize, the Kate Braverman Short Story Prize, Moment Magazine/Karma Foundation Short Fiction Prize, and the Arthur Edelstein Prize for Short Fiction. Her stories have appeared in numerous literary journals and magazines. Subtle Variations and Other Stories is the recipient of the inaugural "First Fiction" Prize from Holy Cow! Press.
or
Buy Here
Copyright © 2020 American Booksellers Association