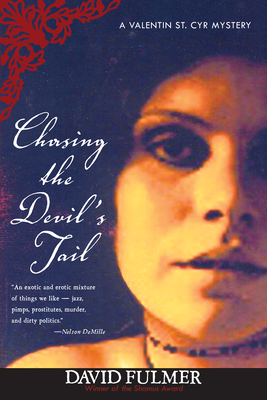 Storyville, New Orleans, 1907. Storyville, New Orleans. Along these scarlet streets, two thousand "sporting women" service gentlemen and rounders in grand mansions and filthy dime-a-trick cribs. The rye whiskey flows like a brown river and morphine and cocaine are sold over the counter. Meanwhile, the first crazy notes of the music they call jass are blasting out of the saloons and dance halls. Creole detective Valentin St. Cyr pursues a killer among the hustlers, pimps, fancy men, madams, whores, thieves who swarm the twenty blocks after the sun goes down. With a fascinating cast of characters that includes Tom Anderson, "The King of Storyville," the lovely one-time "dove" Justine, the famed madam Lulu White, and the lunatic jazz pioneer Buddy Bolden, Valentin polices a miasma of corruption and sin. The Shamus Award winning novel melds history and fiction in a tale of mayhem, madness, and murder in the only legally-sanctioned red light district in American history. -- Best First Novel - 2002 Shamus Awards -- Best of 2003 List - Borders Books -- Best New Series - Booklist -- Nominee - 2002 LA Times Book Prize -- Nominee - 2002 Barry Award -- Nominee - 2005 Falcon Award CCB is pleased to re-publish the Valentin St. Cyr mystery series in it's entirety and to present the next two new novels in this meticulously researched and widely praised series. This atmospheric, accomplished novel brings to vivid, shocking life the mansions of vice with their 'sporting girls' and their madams and, above all, the tragic figure of King Bolden." -- The Telegraph (U.K) St. Cyr takes his place alongside Harry Bosch and Dave Robicheaux: gripping, visceral, and above all, human." -- The Critical Mystery Tour.

David Fulmer is the author of eleven critically-acclaimed and award-winning novels. Chasing the Devil's Tail was nominated for a Los Angeles Times Book Prize, a Barry Award, and a Falcon Award, was on Borders' Best of 2003 List, and won the 2002 Shamus Award. Jass was nominated for the Best of 2005 lists by Library Journal, Deadly Pleasures Magazine, and The St. Louis Post-Dispatch. Rampart Street was rated New York Magazine's Best Novels You've Never Read and the audiobook won a Benjamin Franklin Award. The Dying Crapshooter's Blues received the BookPage Ice Pick of the Month Award among other plaudits and The Blue Door was nominated for the Shamus Award for Best Novel. Lost River was published in 2009 and The Fall was released by Five Stones Press in 2011. The Night Before, an adult holiday novella, was published as a Bang Bang Lulu Edition in November of 2012, followed by the historical Will You Meet Me in Heaven? in 2014 and The Iron Angel, the fifth novel in the acclaimed Storyville series, in March of 2015. His books have received superlative reviews from The Times Picayune, The New York Times, Publishers Weekly, The San Francisco Chronicle, The Washington Post, The St. Louis Post-Dispatch, BookList, Kirkus Reviews, The Baltimore Sun, Mystery Review, The Detroit News, The Telegraph (UK), The Plain Dealer, Crime Spree Magazine, The Boston Globe, Crimetime UK, The Tennessean, Library Journal, Jazz Review, The Christian Science Monitor, and numerous other publications and book websites. His novels have been released in audiobook and have been translated into Italian, French, Japanese, and Turkish. A native of central Pennsylvania, David Fulmer lives in Atlanta with his wife Sansanee Sermprungsuk. St. Cyr takes his place alongside Harry Bosch and Dave Robicheaux: gripping, visceral, and above all, human." -- The Critical Mystery Tour
Loading...
or
Not Currently Available for Direct Purchase