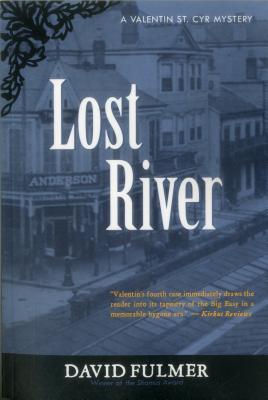 Autumn 1913. Valentin St. Cyr has been absent from his Storyville stomping grounds for some months, trying to make it in the straight detective world and make a go of it with his longtime love, Justine. But then a man is found dead in a district brothel. The madam immediately turns to the Creole detective for help. He resists, but when several more bodies turn up, Valentin can't help but come to the aid of the place--and the people--he tried to leave behind. Just when he has the case wrapped around his finger, it turns out Valentin has been played. The police captain thinks he's meddling and may be guilty of murder. He's on the run, and Justine has turned her back on him, retaliating with a handsome young fellow in a very sporty car. But is she being lured into a trap too? Taking us back to his acclaimed and much-loved Storyville series, award-winning author David Fulmer marks a heart-pounding return to the streets of early-1900s New Orleans with Lost River. Fulmer's evocative prose captures the sights, sounds and smells of 1913 Storyville in his superior ''Lost River''....a testament to the never-ending saga of New Orleans. (USA Today )

David Fulmer is the author of eleven critically-acclaimed and award-winning novels. Chasing the Devil's Tail was nominated for a Los Angeles Times Book Prize, a Barry Award, and a Falcon Award, was on Borders' "Best of 2003 List," and won the 2002 Shamus Award. Jass was nominated for the "Best of 2005" lists by Library Journal, Deadly Pleasures Magazine, and The St. Louis Post-Dispatch. Rampart Street was rated New York Magazine's "Best Novels You've Never Read" and the audiobook won a Benjamin Franklin Award. The Dying Crapshooter's Blues received the BookPage "Ice Pick of the Month Award" among other plaudits and The Blue Door was nominated for the Shamus Award for Best Novel. Lost River was published in 2009 and The Fall was released by Five Stones Press in 2011. The Night Before, an adult holiday novella, was published as a Bang Bang Lulu Edition in November of 2012, followed by the historical Will You Meet Me in Heaven? in 2014 and The Iron Angel, the fifth novel in the acclaimed Storyville series, in March of 2015. His books have received superlative reviews from The Times Picayune, The New York Times, Publishers Weekly, The San Francisco Chronicle, The Washington Post, The St. Louis Post-Dispatch, BookList, Kirkus Reviews, The Baltimore Sun, Mystery Review, The Detroit News, The Telegraph (UK), The Plain Dealer, Crime Spree Magazine, The Boston Globe, Crimetime UK, The Tennessean, Library Journal, Jazz Review, The Christian Science Monitor, and numerous other publications and book websites. His novels have been released in audiobook and have been translated into Italian, French, Japanese, and Turkish. A native of central Pennsylvania, David Fulmer lives in Atlanta with his wife Sansanee Sermprungsuk.
Loading...
or
Not Currently Available for Direct Purchase