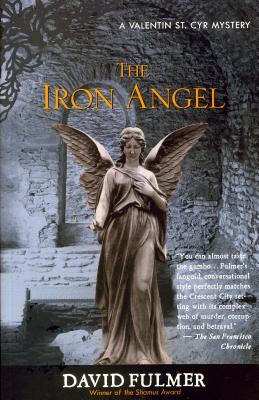 No one cares much when a couple of street whores working the lowest rung on the prostitution ladder in 1914 New Orleans are murdered in the same fashion. But when a third sporting woman turns up dead in a crib, a small panic ensues, and Tom Anderson, now beginning his third decade as the King of Storyville, sends word from his hospital bed to Creole detective Valentin St. Cyr. The detective steps grudgingly into the investigation that propels The Iron Angel, the fifth novel in the acclaimed Storyville series. There's a second tale brewing within these pages. In a convent in Terrabonne Parish, a mysterious woman who is alone and adrift draws the interest of the local sheriff. Valentin works the serial murders as the killer taunts the police, using the moniker Gregory. The detective's old nemesis Captain Picot is furious when he's ordered to let him have the run of the streets; until, that is, he notices something oddly familiar in a message from Terrabonne Parish that mentions a mysterious woman named EvangelineGregory at first keeps one step ahead of Valentin, but the detective is soon checking him and his bloody campaign at every turn. With the detective closing in on him, he devises a plan to offer the captain a deal with the devil. But instead of keeping his end of the bargain, Gregory decides to betray Picot and goes after the mystery woman on his own. As Valentin races to save Evangeline - whoever she might be - a storm sweeps across the bayou, heading for New Orleans and drives the tale to a wild climax. With The Iron Angel, David Fulmer revives an extraordinary time and place with the same deeply evocative skill that earned the four previous novels such critical acclaim.

David Fulmer is the author of eleven critically-acclaimed and award-winning novels. Chasing the Devil's Tail was nominated for a Los Angeles Times Book Prize, a Barry Award, and a Falcon Award, was on Borders' "Best of 2003 List," and won the 2002 Shamus Award. Jass was nominated for the "Best of 2005" lists by Library Journal, Deadly Pleasures Magazine, and The St. Louis Post-Dispatch. Rampart Street was rated New York Magazine's "Best Novels You've Never Read" and the audiobook won a Benjamin Franklin Award. The Dying Crapshooter's Blues received the BookPage "Ice Pick of the Month Award" among other plaudits and The Blue Door was nominated for the Shamus Award for Best Novel. Lost River was published in 2009 and The Fall was released by Five Stones Press in 2011. The Night Before, an adult holiday novella, was published as a Bang Bang Lulu Edition in November of 2012, followed by the historical Will You Meet Me in Heaven? in 2014 and The Iron Angel, the fifth novel in the acclaimed Storyville series, in March of 2015. His books have received superlative reviews from The Times Picayune, The New York Times, Publishers Weekly, The San Francisco Chronicle, The Washington Post, The St. Louis Post-Dispatch, BookList, Kirkus Reviews, The Baltimore Sun, Mystery Review, The Detroit News, The Telegraph (UK), The Plain Dealer, Crime Spree Magazine, The Boston Globe, Crimetime UK, The Tennessean, Library Journal, Jazz Review, The Christian Science Monitor, and numerous other publications and book websites. His novels have been released in audiobook and have been translated into Italian, French, Japanese, and Turkish. A native of central Pennsylvania, David Fulmer lives in Atlanta with his wife Sansanee Sermprungsuk
Loading...
or
Not Currently Available for Direct Purchase