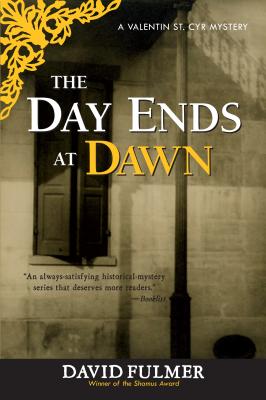 November 18. 1917. America has begun to just send troops "Over There" as part of the Great War effort. The Roaring Twenties are on the horizon. And in New Orleans, Storyville is closing its doors after twenty years as the only legally-sanctioned the red-light district in American history On the morning of this last twenty-four hours, private detective Valentin St. Cyr rises to be greeted by a shot fired through the window of the bedroom he shares with is wife Justine. And so begins "The Day Ends at Dawn," the seventh and final novel in David Fulmer's acclaimed St. Cyr series. It becomes clear early on that a mysterious man who goes by "Mr. Blank" is out to strike at the detective and then kill him before the Storyville clock runs out. Who and why are unknown, but a pattern is set by attacks on those closest to him: Each, the man once known as Beansoup and Valentin's eyes and ears on the New Orleans streets; Tom Anderson, the one-time "King of Storyville"; Frank Mangetta, the Sicilian saloonkeeper who stood up for Valentin after his father's tragic death; Evangeline, the curious woman who has come to live with them; and Justine, once a quadroon "sporting girl" and Valentin's wife for seven years. More characters in his orbit arrive to help, hinder or witness his travails: Lulu White, the most famous madam in all of New Orleans, returning at long last; former police captain J. Picot, Valentin's long-time nemesis; and finally, Buddy Bolden, the madman musician who was the detective's childhood friend. Through the morning, noon, and night, Valentin seeks to track down Mr. Blank and protect his family and friends. All this, over the wild and raucous last night of the infamous place called Storyvill.

As an author, Fulmer has written and published ten novels and one novella since 2001, along with several short stories. As a journalist, he has written about music and other subjects for the Atlanta Journal-Constitution, Southline, Atlanta Magazine, City Life, Markee, Georgia Music Magazine, Blues Access, Il Giornale, Goodlife, Advertising Age, The Atlanta Tribune, Creative Loafing, and BackStage. He has also worked as a welder, a display fabricator, and a bartender. Fulmer wrote and produced the documentary Blind Willie's Blues (1997), [2] which Video Librarian called "nothing less than the economic, social, and historical evolution of America's indigenous music". He also wrote and produced the Americana audio series for National Public Radio (NPR) affiliate WABE-FM and WMLB-AM, both in Atlanta. He is the co-producer of "Piano Red - The Lost Atlanta Tapes", a CD collection by rock-and-roll legend Piano Red, released in August 2010 on Landslide Records. During his freelance career, he worked as a welder, a renovation carpenter, a set-builder, and a bartender. As a communications professional, he worked in the motorsports industry as Media Director for the Panoz Schools and Road Atlanta in Braselton, Georgia (1988-1999). He has taught fiction and non-fiction classes and workshops at varioius locations around the southeast. His website is www.davidfulmer.com
Loading...
or support indie stores by buying on