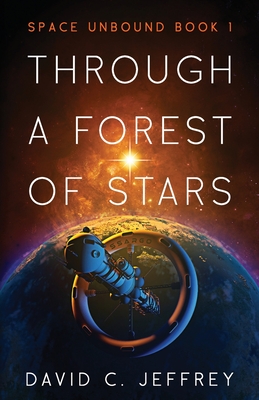 Through a Forest of Stars

Year 2217. Earth's biosphere is dying, Mars' terraforming projects are in ruin, and even the voidoids-eerie portals into nearby star systems-have failed to uncover any new Earth-like worlds within Bound Space. But that's about to change. Terra Corporation's discovery of Silvanus, a pristine forest world 27 light-years from Sol, should be cause for rejoicing. Instead, humanity is on the brink of a catastrophic war over its possession, and Aiden Macallan, the company's planetary geologist aboard the Argo, finds himself plunged to the center of the conflict.

After a skirmish between military forces of Earth and Mars, Aiden is stranded alone on Silvanus. Drawn into its mysterious beauty, he soon discovers the entire planet is alive-living proof of the Gaia Hypothesis. Its vast global network of symbiotic fungus has evolved a neural net from which a consciousness of profound depth has emerged. It also happens to hold the key to restoring Earth's dying biosphere and the rapid terraforming of Mars-but only if Aiden can solve the deeper puzzle of why Silvanus is killing itself.

Aiden's quest is facilitated by an eccentric AI whose fondness for jazz enables communication with the planet's neural net, and by his love for Skye Landen, a gifted geophysiologist from the Lovelock Institute. But time is running out. Cole Brahmin, Terra Corp's malevolent jackal, has gone rogue. He's racing toward Silvanus aboard the Domain's most powerful battle cruiser, bringing war in his wake and pursuing foul designs of his own in which the ruination of Silvanus is only a prelude. Determined to stop him and to help Aiden in his quest to save the planet, Skye Landen enlists the aid of renowned quantum physicist Elgin Woo, founder of the Cauldron. Together they set out for Silvanus aboard Woo's Starhawk, an experimental spacecraft with mind-boggling capabilities. Meanwhile, Aiden must trek across a living landscape of exquisite diversity, guided by a recurring dream in which dark pagan archetypes grow frighteningly real-and more personal-with each step of the way.

They're all on a collision course that can end only in the destruction of civilization or its ultimate salvation.