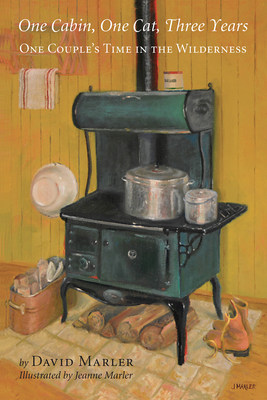 One Couple’s Time in The Wilderness

In 2013 my wife, Jeanne, and I, she in her late sixties, I in my early seventies, set out to fulfill our long held dream of living in the woods for a year. Before leaving our home in the Eastern Townships of Quebec, I contacted the editors of Tempo, the monthly news magazine in the Town of Lac Brome (which I will refer to as “Lac Brome”), to enquire whether they would be interested in receiving reports of our progress in the endeavour. They said, “Yes.” This book is based upon those articles.

My original intention was to produce a work echoing the objectives of Thoreau who, in addition to describing his daily life in his chosen wilderness, commented on the mores and politics of his time in his Walden. However, each time that I penned such a commentary, I realized that it detracted from the essence of our experience. The reaction to the Tempo articles proved that the unfolding of the tale of our daily lives was all that was required to engender intense interest and comment. Thus this memoir has to do exclusively with living in the woods.

How It All Began
We arrived in the mid-afternoon of June 15, 2013. The car and trailer were loaded to the gills. Scooter, our cat, lay sedated in her cage. She does not like to travel and hates being in her cage. She, particularly, does not like the movement of the car if we are going over any sort of bump, bumps being inevitable on the thirty-five km of forestry roads we take once leaving the highway in La Tuque. The unloading of our stuff and the carrying of it to the cabin was a major effort, all being by packsacks, boxes and bags. The parking spot on the track in is 350 m from the cabin. I made ten trips, thus round trips totaling 7,000 m, 3,500 of them loaded.

We had decided that to be true to our wilderness endeavor, we would not have a road excavated to the cabin. The ground, as was discovered during the building process, is too rough for anything other than a high clearance ATV (all-terrain vehicle). The track, from where we park the truck, which leads to the cabin, is a series of drops over rock ledges. Given the nature of the ground and that the ATVs and their trailers were generally fully- loaded, it was not surprising that two of them were wrecked during the building process.
The carrying of immediately required articles and food accomplished, we then indulged in a soothing swim and returned to the cabin as enthused and as excited as newlyweds. We opened a bottle of wine on the west-facing balcony, watched the sun set and rejoiced to see a pair of loons on the lake. Supper, then bed, exhausted but exhilarated.
********************
For about as long as I have known Jeanne she has wanted to spend an entire year, three hundred and sixty-five consecutive days, in the woods. This is not motivated by a desire to be a hermit or because she is anti-social. To paraphrase Montaigne, she is quite content living a private life but that does not mean that she is unsuited to a public one. After all, she insisted, it is only for one year. When I asked, “Might it be that you would never come back?” she answered, “It’s only for a year.” I should immediately add that this was not to be a year alone. Jeanne insisted that I was part of the plan and was to go with her. I like to think that this was because she loves me but if that was only part of the reason, for she would need a hewer of wood and fetcher of water, a man servant in the general sense, then I was content, for I need looking after myself and our lives have been inter-dependent since the day of our marriage which was over fifty years ago.

Our adult lives have been outwardly quite normal. I am a lawyer specializing in maritime law, meaning having to do with ships. Jeanne has been a school teacher, first at Westhill High School and then at the Convent of the Sacred heart, both in Montreal. She then embraced her childhood dream of being a ballet dancer, which lead to her becoming a choreographer, teacher and performer of dance, first on the teaching staff of les Ballets Jazz de Montréal, then as owner of le Centre de Dance Jeanne Marler, which included an annual, international, two-week dance seminar with closing performance, called Focus on Jazz. It attracted aspiring pre-professionals from around the world. At a certain point, she decided that if she could no longer physically perform the dance movements at the level which she had attained in her performance career, it was time to move on. She obtained a diploma from the New York School of Interior Design and embarked upon that profession until she found it too commercially driven, the demands of the clients too often conflicting with Jeanne’s sense of what was artistically and/or practically appropriate. She then opened a performing and fine arts camp for children and adolescents, set in the pristine hills and woods of Vermont, which she ran with great success for three years, until the property which she had leased became no longer available, due to the owner’s intention to build a hotel on the site. In the mid-nineteen-nineties she turned to painting. Her sketches, oil paintings and photography illuminate this book.

“But why in the woods?” many asked. Most Canadians think of going south rather than north for vacations or retirement. Only Jeanne might properly be able to answer that question. She is a spiritual person, very much in the Celtic tradition. When we go to the woods she becomes very quiet.  On family vacations to wilderness locations, the children used to say, “That’s it for talking to Mum. She will turn into a rock or a mushroom or something for as long as we are here”.  And so it was.  On our departures from such places she often cried. We asked, “What’s the matter?” There would be no answer. I think it had and has simply to do with leaving places where her spirit finds its natural home.

David Marler is a Canadian lawyer. He and his American born wife Jeanne, an artist, have spent most of their vacations in the great outdoors. They have cross-country skied into remote lodges of the Canadian Rockies, built a log cabin on a Lake Tremblant, in Quebec, and poked into every nook and cranny of Vermont’s Northeast Kingdom, where they lived in the 1990s. They now live in southern Quebec looking over and exploring the same Appalachian Mountains that they saw every day from their house in East Burke, Vermont.

David Marler is a Canadian lawyer. He and his American born wife Jeanne, an artist, have spent most of their vacations in the great outdoors. They have cross-country skied into remote lodges of the Canadian Rockies, built a log cabin on a Lake Tremblant, in Quebec, and poked into every nook and cranny of Vermont’s Northeast Kingdom, where they lived in the 1990s. They now live in southern Quebec looking over and exploring the same Appalachian Mountains that they saw every day from their house in East Burke, Vermont.

Jeanne Marler’s long held plan was to spend, with David, a complete year in a wilderness situation. This book tells that story and how the planned one year became three, in the forests of Quebec.