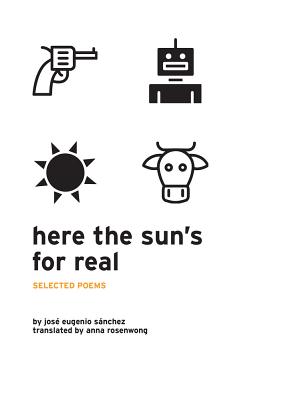 Here the Sun's For Real

Intensely contemporary and aggressively playful, this collection of poetry lives in the borderlands: between Mexico and the United States, between art history and rock, and between criticism and camp. The translation by acclaimed translator Anna Rosenwong gathers together selections from four books by the Mexican poet José Eugenio Sánchez, a self-described “underclown” whose poetry is influenced as much by art history and classical music, as it is by rock music and politics. While always culturally and politically engaged, this book is also marked by a sincere love for American culture, a delight in profanity, and, perhaps most refreshing, a goofball sense of humor.

José Eugenio Sánchez is a performer in a poetry and rock band, Un País Cayendo a Pedazos. He is a member of FONCA’s Sistema Nacional de Creadores de Arte, the recipient of an Honorary Fellow Writer grant, and the winner of the Loewe Foundation’s 10th International Prize for Young Poets. He lives in Mexico City. Anna Rosenwong is a translator, editor, poet, and educator. She won the Best Translated Book Award for Rocio Ceron’s Diorama and has received fellowships from the National Endowment for the Arts, the Banff International Literary Translation Centre, the University of Iowa, and the American Literary Translators Association. She is the translation editor of Anomaly. Her scholarly and creative work has been featured in such venues as Gulf Coast, The Kenyon Review, Modern Poetry Today, Words Without Borders, and World Literature Today. She lives in San Diego, California.
Loading...
or support indie stores by buying on