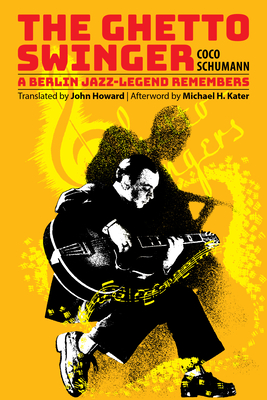 Jazz in Nazi-era and postwar Germany, as lived by a Jewish prodigy who survived the horrors of Theresienstadt and Auschwitz.

"Coco, it's not important what you play. It's important how you play it," said Louis Armstrong to jazz and swing guitarist Coco Schumann during a break between sessions. Recalling this episode Schumann reminds readers that even in the midst of real-world nightmares, music is alive and musicians experience this essential freedom and hope, which they can, in turn, give to their audiences. Throughout his remarkable life, Coco Schumann (b. 1924) would accumulate accolades, including the Order of Merit from the Federal Republic of Germany in 1989 and the prestigious Ehrenpreise Lifetime Achievement Award in 2015, and play with jazz greats Toots Thielemans, Dizzy Gillespie, Louis Armstrong, Ella Fitzgerald, and others. But few knew he relied on composing music and performing for live audiences to ease the burden of his wartime memories.

After forty years of silence Schumann's memoir opened a rare window into the previously unknown life of one of Germany's most renowned musicians, who was a member of the vibrant and illegal Berlin club scene, a part of the cultural revival of postwar Berlin, and a survivor of Theresienstadt (Terezin) and the horrors of Auschwitz.

Shortlisted for the 2017 A.R.S.C. Awards for Excellence in Historical Research in Jazz.

Coco Schumann (b. 1924 Berlin) is an award-winning swing and jazz guitarist. He has played with jazz greats, has been a composer and arranger, taught guitar at the music academy in Zehlendorf, and has put out numerous collections. He was awarded Honors of Merit from the Federal Republic of Germany in 1989, the City of Berlin in 2008, and in 2015 was given the prestigious Ehrenpreis for lifetime achievement in music from the German Record Critics. John Howard, an American who lived in Berlin for more than two decades, has translated books from German to English and edited and translated many screenplays and treatments for film. He taught English language and literature in the U.S., Germany and Beijing and has been engaged as a producer-director for German radio and television (SWF, BR, HR). He is currently working on a book about his experiences living in China.Michael H. Kater, a former professional jazz musician, is Distinguished Research Professor of History Emeritus at York University in Toronto and a Fellow of the Royal Society of Canada. He is the author of ten books, including Hitler Youth (Harvard 2004). His latest book is Weimar: From Enlightenment to the Present (Yale 2014). Co-author Michaela Haas is a journalist and life coach as well as the author of several self-transformation books. She has written for Germany's leading newspapers and was the host of an award-winning TV interview program. She holds a PhD in Asian studies. Co-author Max Christian Graeff is a German author and publisher. He has written several books and essay collections (in German) published by Deutsches Taschenbuch Verlag and NordPark Verlag, has made art, given performances and lectures as well as having sung with the German rock band The Morlocks.
Loading...
or support indie stores by buying on
(This book is on backorder)