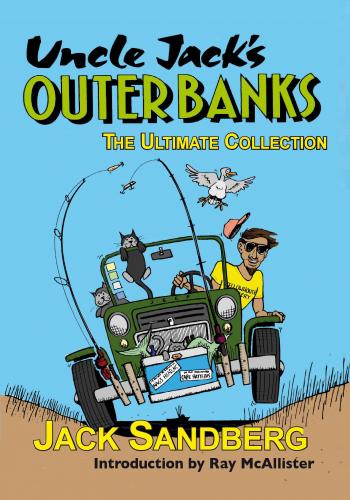 "UNCLE JACK’S OUTER BANKS: The Ultimate Collection," by award-winning OBX humorist Jack Sandberg, has been published by Beach Glass Books. It features more than 50 of the long-time humor columnist’s laugh-filled essays and letters, plus more than 20 cartoons. Author Ray McAllister has added an introduction on the importance of Sandberg’s more than three decades of writing.

LONG THE FUNNIEST, and savviest, commentator on North Carolina's beloved Outer Banks, "Uncle Jack" Sandberg is shown to best effect with this ultimate collection of his hilarious—and on-the-mark—observations, supplemented by the work of great cartoonists. Sandberg dispenses stories, advice, criticism, annoyance, warnings, insight, and always laughs, about this narrow strand of islands that has become one of America's premier vacationlands. From Corolla to Hatteras Island, with stops at Manteo, his beloved South Nags Head, and all spots in-between, Uncle Jack does indeed own the Outer Banks.

"UNCLE JACK'S OUTER BANKS: The Ultimate Collection" is the perfect gift or memento for anyone who loves the Outer Banks or just likes to laugh. It is, as Uncle Jack says, "a pretty funny book."

Praise for early editions of Uncle Jack’s Outer Banks:
"Anyone who has an OBX sticker on his car is apt to know of Uncle Jack... an inventive and funny fellow. Uncle Jack pokes gentle fun at tourists and not-too-subtle fun at real estate sales persons. ... As refreshing as a breeze off the surf."—NEWPORT NEWS DAILY PRESS
"The funniest writer in America."—HUMORIST ROBERT SKOGLUND
"It is a very funny and ... very wise book."—RALEIGH NEWS AND OBSERVER

JACK SANDBERG wrote a weekly "Uncle Jack" column of humor and commentary for first the Outer Banks Current and then the Outer Banks Sentinel during much of the 1980s, 1990s, and 2000s. A Wisconsin native who taught at Carnegie Mellon University in Pittsburgh, Sandberg visited North Carolina's Outer Banks in 1969, then moved there 10 years later. He remained for 40 years.
Loading...
or
Not Currently Available for Direct Purchase