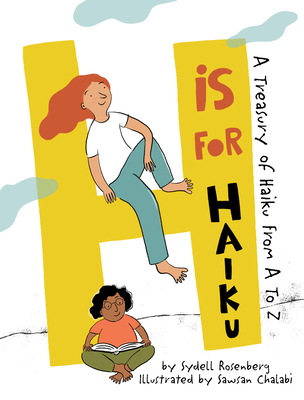 H Is For Haiku

A Treasury of Haiku from A to Z

In this award-winning collection of ABC haiku, readers will witness a boy sitting on a mailbox, drops of rain clanking on a watering can, waiting in line for ice cream, and so much more—all in haiku form and vibrant, playful illustrations.

Inspired by her experiences living in New York City, Sydell Roseberg’s haiku invite children and grown-ups alike to slow down, linger, and pay attention to the moments we often overlook. Illustrated in a dynamic and colorful style with text integrated into the images, H is for Haiku is a delightful addition to any bookshelf.


Praise For H Is For Haiku: A Treasury of Haiku from A to Z…

"…a delightful exploration of the alphabet through Haiku. Each page explores a moment in time with lovely, lyrical and luscious language. Colorful, playful illustrations complement the poetic text. The illustrations feature whimsical word art that enhances the reading experience.” —Writers’ Rumpus

Sydell Rosenberg (1929-1996) was a charter member of the Haiku Society of America in 1968 and served as HSA’s Secretary in 1975. Her short poems – notably haiku and senryu – as well as other poetry, were published in various magazines and anthologies. Syd received her M.A. in English as a Second Language from Hunter College in 1972. It was Syd’s dream to publish a book of haiku for children. She lived, wrote, and taught in New York City.

Sawsan Chalabi is a Lebanese-American illustrator and designer. She earned her MFA in Illustration from Savannah College of Art and Design. When she is not at her computer making digital illustrations, she can be found in her studio getting messy with inks and paint. Her work has been published with several magazines and publishing houses such as Cricket Magazine, Bust Magazine, Wine & Spirits Magazine, Applied Arts Magazine, Penguin, and Lee & Low Books, among others. She currently resides in Washington, D.C.