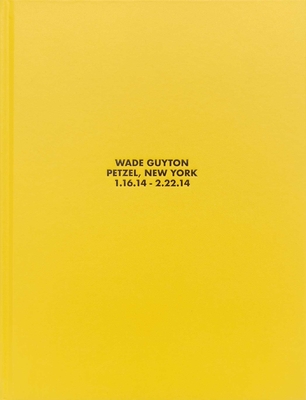 Wade Guyton, Petzel, New York, 1.16.14 - 2.22.14 is the long-awaited volume that documents a one night only performance hosted at Petzel Gallery as part of Guyton’s seminal 2014 exhibition, in which the artist made long horizontal black paintings stretched to precisely fit the gallery walls.

In 2007, Guyton showed a series of black paintings made with his Epson 9600 printer and covered the gallery’s concrete floor with a facsimile of his studio’s plywood floor. For the 2014 exhibition, he made five new works on linen using the same digital file from 2007, this time enlarged to accommodate the increased width of an Epson 11880. The works were turned on their sides, hung horizontally and stretched to fit the gallery walls. Two of them were jammed in a corner. In addition to the five paintings, he presented a new wood and concrete sculpture that took its form from the coat check counter at the Carnegie Museum in Pittsburgh, where concurrently he had installed four paintings for the International.

Bettina Funcke is an art historian based in New York. She has taught and published widely, and is currently editing a book on the history of MoMA PS1. In 2016 Funcke initiated a series of dialogues with artists and visual thinkers at Artists Space; participants included Douglas Crimp, Laura Poitras, Sarah Morris, and John Knight. Funcke was Head of Publications for dOCUMENTA (13) and edited the 100 Notes – 100 Thoughts book series. In her teaching, dialogues, editorial projects, and writing, Funcke situates artists and thinkers in the context of a rapidly changing public sphere where contemporary art's growing popularity is proportional to a growing political impotence. She is a co-founder of the publishing collective Continuous Project and of Leopard Press.

Wade Guyton is an American painter and sculptor born in 1972 in Hammond, Indiana. He received a BFA from the University of Tennessee, Knoxville. He is currently based in New York. Over the past decade, Guyton has pioneered a groundbreaking body of work that explores our changing relationships to images and artworks through the use of common digital technologies, such as the desktop computer, scanner, and inkjet printer. Guyton’s purposeful misuse of these tools to make paintings and drawings results in beautiful accidents that relate to daily lives now punctuated by misprinted photos and blurred images on our cell phones and computer screens.
Loading...
or
Not Currently Available for Direct Purchase