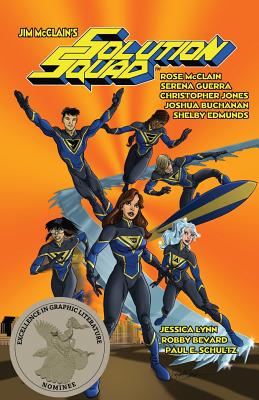 When a group of six math-themed teen superheroes takes flight in their amazing Coordinate Plane on a new mission, pure adventure awaits Using their incredible wits and special powers to solve deadly puzzles and defeat their enemies, Jim McClain's Solution Squad helps you learn math without even trying From the temperature-changing hothead Absolutia to the newest member of the team, Radical, each member of the Squad teaches you and reminds you of math concepts with every use of their powers and mention of their names

Facing villains like The Poser, The Reverse-Engineer, and the Confectioneer, whose powers come from chemicals based on candy, the Solution Squad never fails to deliver excitement and heartfelt emotion as they work together to solve problems. This 144-page graphic novel was created, written and designed by award-winning middle school math teacher Jim McClain, recipient of the 2014 Lilly Endowment Teacher Creativity Fellowship and 2018 Pop Culture Educator of the Year, Middle Level.