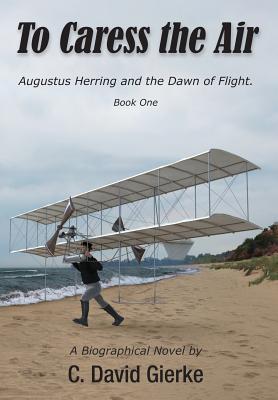 Augustus Herring and the Dawn of Flight. Book One.

Most people accept the view that the Wright brothers invented the airplane. "Not so " according to American aviation pioneer Augustus Moore Herring. "The aeroplane has a good many daddies." Herring should know; he was there.

To Caress the Air is a biographical novel based on Herring's 22-year career in aeronautics. The story takes place in the United States during the late 19th and early 20th centuries and chronicles Herring's aeronautical achievements, his ordeals, and his triumph over severe adversity. Seldom acknowledged by historians or authors, Herring was nevertheless portrayed by his cutthroat contemporaries as an "aeronautical hyena" - a surly character who prowled the boundaries of the flying-machine community.

Influenced by the Gilded Age idea that a young man could attain a life of accomplishment and honor through hard work, determination, and courage, Herring soon learned that Horatio Alger's "rags to riches" narrative paled in the face of unrelenting rejection. Alger had also suggested that an older, kindly, and prosperous benefactor might be useful in assisting a young man's success. In 1893, at the age of 26, Herring met that person: someone who eventually proved to be his greatest antagonist.

To Caress the Air makes use of recently unearthed historical documents and never-before-seen information provided by Herring's heirs. The book's setting is the New York State Supreme Court, Monroe County Courthouse, in Rochester. Herring's story is told through his testimony during the 1921 civil trial, Herring-Curtiss Company v. Glenn H. Curtiss, et al., which provides the platform for flashback scenes that document his dealings with many of the era's aeronautical giants, including Lilienthal, Chanute, Langley, and Curtiss. The novel is rich with accurate technical and biographical details and is accompanied by pertinent footnotes.