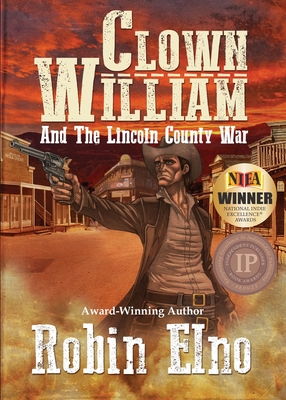 A reluctant 1870s gunslinger with Tourette's and a quick draw . . .

When William escorts the lady Emily over the mountains and into Lincoln, New Mexico, he finds her brother John in a battle for survival in the infamous Lincoln County War. The sheriff and his posse of hired killers, secure under the protection of the courts and the governor, have a stranglehold on the town. Eastern newspapers called Lincoln's main street "the most dangerous street in American." And that was before William arrived.

Clown William and the Lincoln County War is the Winner of the 2019 National Indie Excellence Awards for Western Fiction and the Clown William series is a Bronze Winner for Best Fiction Series in the 2019 Independent Publisher Book Awards (IPPYs). The first book in the series, Clown William, is Winner of the Arizona Authors' Association Literary Award, Silver Winner in the 2018 Independent Publisher Book Awards ("IPPY" Awards), and a Finalist in both the 13th Annual National Indie Excellence Awards and the 2019 Next Generation Indie Book Awards. The third book in the series, Clown William and the Wind of Vengeance is now available Learn more at ingramelliott.com/clownwilliam.