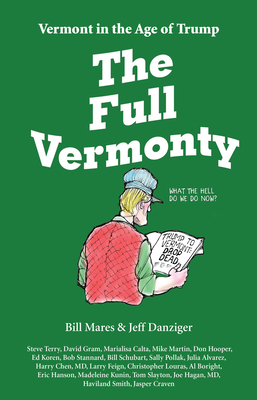 Vermont in the Age of Trump

What were you thinking?  Donald Trump as our president?  You’re kidding, right? Vermont has withstood the Revolution, a New York invasion and the New Hampshire Land Grants and will assuredly survive the next few years under the Washington axis of evil, a.k.a. the Trump Administration, Congress and Supreme Court.

We are a small state with a history of making a large impact. We banned billboards and went to great lengths to protect our natural resources, as well as our natural beauty. We’ll be damned if we’re going to let a man who dyes his hair, cheats workers and has his products made in China dictate to us how life should be. Life in Vermont is already great. A man who lies as easily as the average Vermonter catches fish is not someone we’re going to spend much time listening to.

That said, we recognize that we can’t ignore him and his actions. Then again, he won’t be able to ignore us, either. We're little, but we're loud, and we’re not afraid to elect New Yorker, Bernie Sanders, to carry our message nationwide.  Mr. Trump may see himself as a western version of Vladimir Putin, but we don’t see him as such. He’s just a bully used to stiffing banks (Vermonters make their payments), stiffing his subcontractors (we pay them, because we’re related to most of them), and treating women poorly (we just know better).

Short of seceding from Union (we’ve already tried that to no avail), you can be sure that we’re not just going to sit back and be bullied, stiffed, railroaded, and abused. That’s not our style. Vermonters fight back; always have and always will. We love a good fight and those who challenge soon learn that Vermont generally wins. We’re tougher than the bully in the White House and he’s about to learn that first hand.

With the help of almost a score of  “guest appearances,” our literary duet has now become a chorus. We have assembled a first-rate “posse” of Vermont writers, cartoonists, and politicians to add their intelligence and wit to this momentous task. In addition, the book has quizzes, quotations, escape literature, a Vermont tool box, and more—all the things necessary to flesh out this thump to The Trump.

Praise For The Full Vermonty: Vermont in the Age of Trump…

At a time when many people are trying to figure out how we ended up with Donald Trump as president, The Full Vermonty offers some comic relief from the painful reality of Trump’s policies. Bill Mares, Jeff Danziger and their band of writers and artists give a brilliant, and very Vermont-like, perspective on where we go from here. We most definitely need this kind of wit and humor in the age of Trump.”— U.S. Senator Bernie Sanders
“Better than all of our flavors combined! This is a book that will make you laugh and cry, not necessarily in that order.” —Jerry Greenfield, Ben & Jerry’s

“This is the worst book ever in the history of the world, a total failure. Sad.”
—@realDonaldTrump

“An anxious nation can rest easy: Vermont will, as always, punch above its weight in the resistance to Mr. Trump.”
—Bill McKibben, founder of 350.org

“People are always asking me: Peter, what can I do about Trump and what’s going on in Washington? My answer: Read The Full Vermonty.” —Congressman Peter Welch

“Bill Mares, Jeff Danziger, and their compatriots stand up and speak their minds about President Donald Trump, frankly and forcefully, with a dash of humor and in a civil tone (well, mostly). But the Time of Trump also demands what Danziger calls “desperate wit,” and the reader will find plenty of that as well.” —Candy Page, Vermont Journalist

“Trump’s narcissism is enough to make any self-respecting Vermonter’s toes curl. The Full Vermonty is THE guide for finding ways to stay sane. The authors’ advice? Overcome Trump-Induced Anxiety Disorder by eating kale and drinking craft beer. Find your moral compass, if you lost it. Don’t watch CNN, do something radical—read a book. Become an activist. But whatever you do, BE a Vermonter; stay feisty and independent.” —Anne Galloway, VTDigger.org

“Come to The Full Vermonty for the cartoons by the incomparable Jeff Danziger. Stay for a primer for the millions of Americans who’ve been asking, “What do we do NOW?” Bill Mares and his gang of Vermont wits and sages actually have answers.” —U.S. Senator Patrick Leahy

Raised in Texas, educated at Harvard, Bill Mares has been a journalist, a high school teacher and a member of the Vermont  House of Representatives. He has authored or co-authored 15 books on subjects ranging from the Marine Corps to workplace democracy to  Presidential fishing, plus four books of humor with Prof. Frank Bryan, including the best-seller, Real Vermonters Don't Milk Goats. His hobbies include running, beekeeping, singing and fly-fishing. He lives in Burlington, Vermont with his wife of 45 years, Chris Hadsel. They have two sons.

Jeff Danziger lives in New York City. He is represented by CWS Syndicate and the NY Times Syndicate. He is the recipient of the Herblock Prize and the Thomas Nast (Landau) Prize. He served in the US Army in Vietnam and was awarded the Bronze Star and the Air Medal. He has published eleven books of cartoons and one novel.