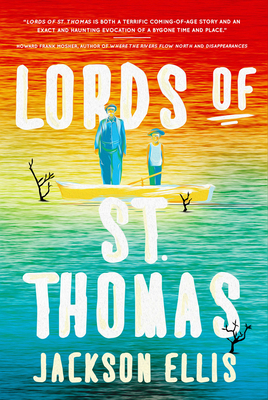 In the Mojave Desert, at the southern end of the isolated Moapa Valley, sat the town of St. Thomas, Nevada. A small community that thrived despite scorching temperatures and scarce water, St. Thomas was home to hardy railroad workers, farmers, shopkeepers, teachers, and a lone auto mechanic named Henry Lord.

Born and raised in St. Thomas, Lord lived in a small home beside his garage with his son, Thomas, his daughter-in-law, Ellen, and his grandson, "Little" Henry. All lived happily until the stroke of a pen by President Coolidge authorizing the construction of the Boulder (Hoover) Dam. Within a decade, more than 250 square miles of desert floor would become flooded by the waters of the Colorado River, and St. Thomas would be no more.

In the early 1930s, the federal government began buying out the residents of St. Thomas, yet the hardheaded Henry Lord, believing the water would never reach his home, refused to sell. It was a mistake that would cost him—and his family—dearly.

Lords of St. Thomas details the tragedies and conflicts endured by a family fighting an unwinnable battle, and their hectic and terrifying escape from the flood waters that finally surge across the threshold of their front door. Surprisingly, it also shows that, sometimes, you can go home again, as Little Henry returns to St. Thomas 60 years later, after Lake Mead recedes, to retrieve a treasure he left behind—and to fulfill a promise he made as a child.

Praise For Lords of St. Thomas…

“Jackson Ellis’s Lords of St. Thomas is the dramatic story of the beleaguered Lord family, forced off their land by the creation of Lake Mead. At the heart of the book are the patriarch Henry Lord, who refuses to leave his doomed home and town, and his young grandson and namesake. Lords of St. Thomas is both a terrific coming-of-age story and an exact and haunting evocation of a bygone time and place. What’s more, it’s a great read. I loved every page." — Howard Frank Mosher, author of Where the Rivers Flow North and Disappearances

“Lords of St. Thomas is a timely, tender, thought-provoking family saga about the importance of keeping promises — no matter how long they take to fulfill. With a playful touch, Jackson Ellis has gifted us with a daring story rich in premise and intrigue with just the right amount of suspense and pathos.” — Nathaniel G. Moore, author of Savage 1986-2011

"Ellis's totally transporting coming-of-age tale takes you to a world or scorching sun, unstoppable storms, and acutely observed heartache. Lords of St. Thomas manages to exist on two planes, succeeding both as compelling historical fiction about one man's steadfast refusal to give in to the rising tide of modernity, and as a beautifully elegiac tribute to lives (and a way of life) now lost. A fascinating, fast-paced, and frequently lovely examination of human struggle in the face of constant change." — Jeremy Robert Johnson, author of Entropy in Bloom

"With Lords of St. Thomas, Jackson Ellis has written a book that is part historic, part environmental, part familial, and always compelling. Ellis draws us deep into the lives of the Lord family as they face the loss of their home, their community, their way of life, and even themselves to the rising waters of Lake Mead. And we readers are sucked along as the family wrestles with the decision to leave or stay while fighting to survive. It's a story that forces the reader to keep reading, one page after the next, to see what becomes of historic St. Thomas — and what becomes of the Lords." ― Sean Prentiss, author of Finding Abbey

Lords of St. Thomas "masterfully couples a historic event with a classic coming of age story . . . [offering] a glimpse into the past and a glimmer of hope for the future." — Midwest Book Review

“Narrated by a native Nevadan born in 1926, Lords of St. Thomas has a distinctly memoiristic feel, like a piece of vintage Americana. . . . Henry Lord's story becomes a form of witnessing, of ensuring that the ghosts of St. Thomas endure into the 21st century. But can he salvage something concrete from that past, or only use his words to bring it to future generations? The answers lie in his ruined home for readers of this sparsely eloquent, elegiac novel to discover.” — Margot Harrison, Seven Days

Jackson Ellis is a writer and editor from Vermont who has also spent time living in Nevada and Montana. His short fiction has previously appeared in The Vermont Literary Review, Sheepshead Review, Broken Pencil, The Birmingham Arts Journal, East Coast Literary Review, Midwest Literary Magazine, and The Journal of Microliterature. He is the co-publisher of VerbicideMagazine.com, which he founded in 1999.