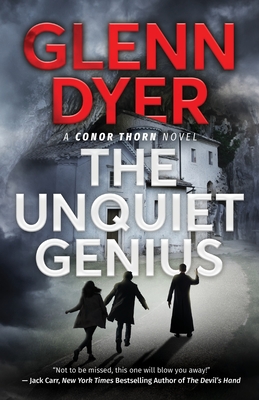 A SCIENTIST IN HIDING. A RACE TO THE ULTIMATE WEAPON. CAN A BOLD OPERATIVE CRUSH NAZI PLANS BEFORE HE'S TAKEN OUT BY A NAZI BULLET?

December, 1942. Conor Thorn will stop at nothing to end Hitler's terror. So when a brilliant nuclear physicist is discovered holed up in Italy, the elite OSS agent reunites with his MI6 counterpart and slips behind enemy lines on a recruitment mission. Now pitted against rival forces also on the hunt, Thorn is hell-bent on preventing the key to an atomic weapon from falling into ruthless Nazi hands.

With the clock ticking on the escalating war, his operation falls under threat when

his objective proves elusive. And as Russia, a double-dealing Italian monsignor, and the Vatican all converge on the reluctant theoretician's hideaway, Thorn struggles to keep clear of an ever-tightening deadly trap.

Can he deliver victory to the Allies before the world goes up in flames?

The Unquiet Genius is the third book in the pulse-pounding Conor Thorn spy series. If you like resolute heroes, nail-biting action, and genocidal global stakes, then you'll love Glenn Dyer's historically inspired thrill-ride.