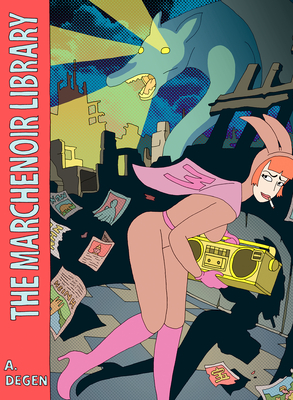 Enter the Marchenoir Library, a gallery of the most beautiful covers from the beloved series, Marchenoir. Unfortunately, the covers are all that's left of the mystery of Marchenoir, ex-celebrity singer/songwriter working as a superheroine to pay off her debts, and defend our dreams and reality, as she searches for a terrestrial paradise. Can you read a book by its covers?

A. Degen was born in Brooklyn, New York. He began making comics with Mashcomix collective while living in Tokyo, Japan. He now lives in the United States and has published work in Japan, Europe, and America. Degen's comics draw on influences from art, literature, classic comics, pulp, mystical religion and philosophy, as well as video games. He has been published in various alternative comics anthologies such as Snakebomb, Sonatina, Futureshock, Chromazoid, Happiness, Felony and others. Degen's first two graphic novels, Mighty Star: and The Castle of the Cancatervater and Soft X-ray/Mindhunters were published by Koyama Press. His latest graphic novel, the Marchenoir Library, will be published by Secret Acres this spring.
Loading...
or support indie stores by buying on