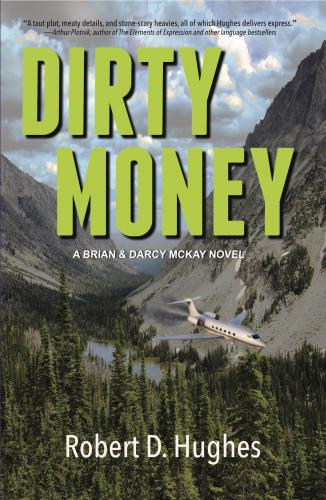 Dirty Money, the eagerly-awaited new novel by Robert D. Hughes, is now available in trade paperback! Dirty Money is the second in the series of thrillers starring ex-FBI agent Brian McKay and his resourceful niece, Darcy McKay. The first book in the series was the critically acclaimed Bone Mountain. A brilliant young accountant’s face is lit by the glowing computer screen in an executive’s office in the three a.m. darkness of a Chicago skyscraper. A familiar man enters and shoots Matthew Growney in the head, killing him instantly. Darcy McKay, college student and fearless survivor of the Bone Mountain dinosaur dig of the previous year, has just lost her boyfriend. Darcy and her uncle, ex-FBI agent Brian McKay, risk their own lives as they investigate the murder, the first of a string of killings by a greedy and twisted cabal of corporate gangsters at Belcoe, Inc. The McKays follow the evidence to Belcoe’s spectacular Montana ranch, where they face off against a squad of goons, a homicidal cop, a malevolent corporate bigwig and a runaway arson fire

PRAISE FOR THE MCKAY THRILLERS
“Soak it up! I love a taut plot, meaty details, and stone-scary heavies, all of which Hughes delivers express. But most of all I feed on language—crisp, alive, and juicy. From a kicked knee that pings like the last kernel in a hot-air popper, to the hero's haute cuisine, an Italian beef sandwich, doughy, soaked, slathered, with bright, deadly-hot peppers, Dirty Money is scrumptious crime fiction au jus!”
—Arthur Plotnik, author of The Elements of Expression and other language bestsellers

“Bone Mountain is a damn good book!”
—Doug Peacock, author of Grizzly Years: In Search of the American Wilderness

Robert D. Hughes is the award-winning author of Dirty Money and Bone Mountain, the first two books in the series of thrillers starring Brian and Darcy McKay. His short stories of crime and mystery have appeared in numerous anthologies and magazines. He earned an MBA from the University of Michigan. As a financial professional in Chicago, Bob investigated white-collar crime, bringing several embezzlers to justice. An Active member of the Mystery Writers of America, he lives in Livingston, Montana
Loading...
or
Not Currently Available for Direct Purchase