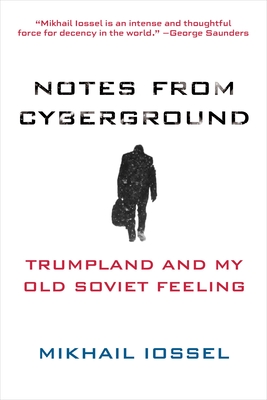 Trumpland and My Old Soviet Feeling

Welcome to the world of Mikhail Iossel--his most enduring, and scathing, commentary on US and Russian politics & culture since the 2016 election

Praise For Notes from Cyberground: Trumpland and My Old Soviet Feeling…

"Mikhail Iossel is an intense and thoughtful force for decency in the world." -George Saunders


"Mikhail Iossel's Notes from Cyberground is our social media De Profundis with a touch of J'Accuse. Thoughtful, furious, eloquent, these posts are the diary of a writer who left the Soviet Union, stayed in touch with the horrors of the Putin reign, and after the 2016 elections, has experienced a hideous deja vu: a nightmare for someone who knows first hand what a dictatorship looks like." -Francine Prose


"Long after the present rulers are deposed, this treasury of invective will deserve to be read on its literary merits, just as we still read Pope's and Swift's satires of their contemporaries. The comparisons between Putin and Trump are especially priceless, as are Iossel's portrayals of his/our liberal befuddlement."-Phillip Lopate


"[Iossel's] unique perspective as an immigrant from the Soviet Union distinguishes his blistering critiques ... of Donald Trump from many other recent anti-Trump books.... The author follows American politics from Election Day 2016 through October 2018.... A vigorous call for Americans to defeat 'the stubborn virus of trumpism in its bloodstream.'"--Kirkus Reviews


"Mikhail Iossel is tracking in real time as we move through this dark stage of American history, and by the time this book comes out there will surely be new posts to seek out further. Which I will do, just as I will reread parts of this book, because he is such a worthy guide here--his point of view a needed cocktail of rage, knowledge, unique personal experience, and hard-won humor."-Aimee Bender, author of The Particular Sadness of Lemon Cake


"The best part of waking up is not coffee in your cup but finding on Facebook one of Mikhail Iossel's bracingly brilliant mini-editorials." -Joel Conarroe, President Emeritus of the John Simon Guggenheim Foundation and PEN American Center


"Mikhail Iossel's Notes from Cyberground is a sharp, biting, brilliant book. Along with Timothy Snyder and Masha Gessen, he has told the terrifying truth about where we find ourselves right now. I consider his work essential reading." -Steve Yarbrough, author of The Unmade World


"Mikhail Iossel's micro-editorials on contemporary American politics have been like tiny little lifeboats on this Trumpian sea of trash. The resulting book-scathing, hilarious, so deeply smart-should be read by everyone who still values decency and democracy." -Robin Romm, author of The Mercy Papers


America under Donald Trump. Many have ridiculed him. None have done so with such scathing wit as Mikhail Iossel. From a youth spent in the USSR to a life remade in the USA, Iossel shares the brunt of this experience on Facebook, where thousands follow his blistering, penetrating posts on Trump's America and Putin's Russia, and his pensive, eerily timely recollections of life under totalitarianism. Notes from Cyberground brings together a choice selection of Iossel's aphorisms, ranging from a few words to a few hundred. Each chapter covers a month from Election Day 2016 to summer 2018. Even when comical, this gem of a book is dead serious. It will bring solace to anyone who feels distressed by today's surreal politics. Read it--you'll be informed, transformed, and even amused--and stay tuned for more.

Mikhail Iossel, the Leningrad-born author of the story collection Every Hunter Wants to Know (W. W. Norton) and coeditor of the anthologies Amerika: Russian Writers View the United States (Dalkey Archive, 2004) and Rasskazy: New Fiction from a New Russia (Tin House, 2010), is a professor of English/Creative Writing at Concordia University in Montreal and the founding director of the Summer Literary Seminars international program. Back in the Soviet Union, he worked as an electromagnetic engineer/submarine demagnetizer and as roller-coaster security guard, and belonged to the organization of samizdat writers, Club-81. He came to the US in 1986, at the age of thirty, a whole and complete life behind him, and started writing in English in 1988. Among his awards are Guggenheim, NEA, and Stegner Fellowships. His stories and other prose, in English and in translation to several languages, have appeared in NewYorker.com, Guernica, Literarian, AGNI, North American Review, Threepenny Review, Interia, Boulevard, Best American Short Stories, and elsewhere.
Loading...
or support indie stores by buying on