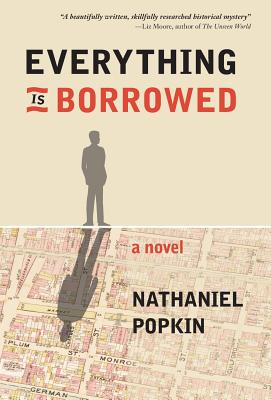 "Everything Is Borrowed unfolds at the intersection of personal history, the history of place, creativity, inexplicable isolation, and attempts to understand it all. This elegant novel is utterly absorbing, thought-provoking, and also moving in ways that are all the more powerful for their quiet, unannounced approach. It is an original and powerful book, and I loved it." --Robin Black, author of Life Drawing

"In a novel of passion and insight, Nathaniel Popkin peels back the layers of a great American city to reveal the previous cities contained within it. He also discovers that a single man can be a city unto himself, densely inhabited by the men he once was and the potential men he might yet be, each driven by his own contradictions and errors, lusts and aversions, triumphs and sorrows." --Ken Kalfus, author of Coup de Foudre

Acclaimed architect Nicholas Moscowitz lands a major commission, but his drive suddenly falters. The site of the new project awakens guilty memories, and when he digs into the place's history, he uncovers a 19th-century Moskowitz whose life offers strange parallels to his own. As Nicholas grows obsessed with this shadow man, the dual narratives of Moskowitz and Moscowitz, the city's past and present, blend in unexpected and poignant ways. Ultimately Nicholas must face certain truths that don't change over time--and use them to rebuild his own life.

"Nathaniel Popkin renders the world of this novel with such precision, and in such stunning detail, that everything is felt. The sense of place, the longing, the regret, the desire, the frustration, the irresistible pull of history all brim with emotional content as Nicholas Moscowitz is thwarted in his attempt to design an apartment building. He must first confront the site of the planned structure, that empty space where he discovers the selves he was, and those yet to be. An immersive read." --Diane McKinney-Whetstone, author of Lazaretto

"In Nathaniel Popkin's evocative novel Everything Is Borrowed, Philadelphia arises from its foundation shimmering with glass and steel. Popkin's portrait of the city of brotherly love carries whiffs of Bellow's Chicago circa Seize the Day, or Newark in Roth's best moments. This is a novel to live inside, and to linger in." --Daniel Torday, author of The Last Flight of Poxl West,

"As architect Nicholas Moskowitz digs through the history of his neighborhood, releasing anarchists and holy men, immigrants and philosophers, and his own lost love, he discovers that we cannot build a meaningful future until we learn to honor the past. Both poignant and cerebral, Everything Is Borrowed is an evocative meditation on the bond between a man and the places that formed him." --Stephanie Feldman, author of The Angel of Losses

"Nathaniel Popkin has crafted a beautifully written, skillfully researched historical mystery. The story is compelling, the characters are fully realized, and the voice is gentle and engaging." --Liz Moore, author of The Unseen World