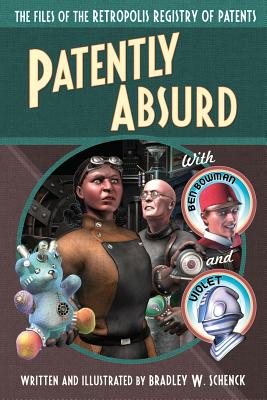 The Files of the Retropolis Registry of Patents

Six stories; forty-four illustrations; 250 pages; one Patent Investigator; one slightly maladjusted robot secretary; and more Mad Science than you can shake a centrifuge at, all from the author/illustrator of Slaves of the Switchboard of Doom.

In the city of Retropolis - which is where the future went, when we got something else - all science is Mad. So scientific laboratories are confined to the city's Experimental Research District. It's laid out in the zoning laws, but what it really is, is self-defense.

There's always the danger that something really awful might happen in the District, though: something so awful that it will escape to the city outside. That's why the Retropolis Registry of Patents keeps an eye on what the inventors of the District are doing from day to day.

At the Registry you might meet Ben Bowman, a patent investigator who's smart in at least one or two of the ways that are important, and his friend Violet, the robot secretary. Violet is convinced that she ought to be an investigator herself.

Between you and me, she's not wrong. But she's had a terrible time convincing one Patent Registrar after another that they ought to promote her; and, strangely, the Registrars never seem to last very long once they disagree.