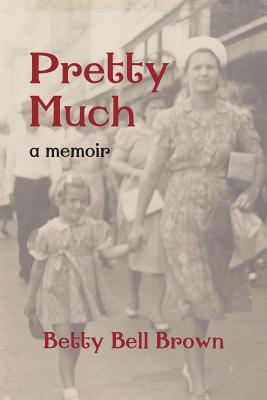 Pretty Much: A Memoir is the story of a girl named Clara, born when little girls wore white ruffled dresses, though she preferred handmade brown jodhpurs she stitched in pink. Clara, of necessity, grew into a woman who made her own way in the world. No obstacle she encountered deterred her from having her own way, "pretty much." Her daughter, Betty, grew up in Clara's shadow and then had to find her way out from under it to realize her own dreams.


Praise For Pretty Much: A Memoir…

Betty Brown has written my favorite kind of book: an utterly gripping memoir about family. It's the story of ordinary people finding themselves in extraordinary, psychologically challenging situations. This is truly a memorable book. –Judy Goldman, author of Together: A Memoir of A Marriage and A Medical Mishap

Reading Pretty Much is like gaining access to the mind of an unusually talented painter who has now captured family and folk of an entire era, with merely words alone. Be ready for lots of smiles and a few tears as Betty Bell Brown reawakens precious years. – Susan Taylor Block, poet and historian

Pretty Much is a palimpsest of author Betty Brown’s mother’s diary, Brown’s own recollections and research, and her original art work mixed with family photographs. The result is a richly textured portrait of a South Carolina family over the twentieth century with an unforgettable matriarch at the center. Brown’s voice is at once familiar and fresh; she is a detached observer whose vaguely ironic tone permeates the memoir’s title and the many narrative strands that verge on tragedy. Her love for her family seeps into even her relatives’ least lovable moments. The reader is simply swept along. – Cynthia Lewis, Charles A. Dana Professor of English, Davidson College
Betty Brown is an esteemed painter who, with an artist’s eye for detail and truth-telling, has written a memoir, Pretty Much, about her prototypically Southern family. It is an astonishing book. She has skillfully interwoven excerpts of her mother’s diary (whose “voice” melds uncannily well with the author’s own), as well as exquisite old photos that lend an almost mythological resonance to a story with more than its share of tragedy. Against all odds, with courage and compassion, Betty Brown has gathered all of these pieces, and much more, in one pitch-perfect, heart-rending book to savor. – Michael White, poet, professor of creative writing UNC-Wilmington
It takes a skilled memoirist to present her family story both from its heart, as if her readers were cousins with a known place in the story, and from the outside, to present facts and perspectives we need as readers. Betty Bell Brown is just such a skilled writer. In Pretty Much, she weaves her readers into the fabric of a complex southern family in such vivid stories that we are delighted to have been invited there. – Dana Wildsmith, author, One Light
Author Betty Bell Brown rewards her readers with the origin of her title on page 211, in a conversation when Brown, was exasperated, fearing her mother will be kicked out of another nursing home., says to her, “You’ve been told not to mess with the other patients, but you do whatever you damn well please . . . Don’t you?” Her mother, “pondered the question only too briefly before she replied, ‘Yep, pretty much.’”
“No ‘pretty much’ about it—she had forever done whatever she damn well pleased,” Brown states.
Pretty Much is a meticulously told, engaging story of the toll Brown’s mother exacted on her family throughout her life of doing “whatever she damn well pleased.” In rendering the life of her beautiful, headstrong, self-centered mother, Brown captures fascinating details of the changing world of the 20th century South from 1913, when her mother was born, onward.
The truths and family secrets Brown unravels along the way make for a rewarding read. Brown herself emerges as a hero—her commitment to caring for her difficult mother and her steadfast love for both of her parents despite their flaws and failures are inspiring. –Maureen Ryan Griffin, poet, essayist, and teacher

Betty Bell Brown is a widely published writer, award-winning artist, and teacher based in Wilmington, NC. Pretty Much: A Memoir is her first full length book.
Loading...
or support indie stores by buying on