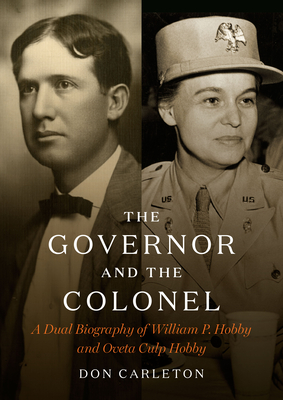 The Governor and the Colonel

William P. "Will" Hobby Sr. and Oveta Culp Hobby were one of the most influential couples in Texas history. Both were major public figures, with Will serving as governor of Texas and Oveta as the first commander of the Women's Army Corps and later as the second woman to serve in a presidential cabinet. Together, they built a pioneering media empire centered on the Houston Post and their broadcast properties, and they played a significant role in the transformation of Houston into the fourth largest city in the United States. Don Carleton's dual biography details their personal and professional relationship--defined by a shared dedication to public service--and the important roles they each played in local, state, and national events throughout the twentieth century.

This deeply researched book not only details this historically significant partnership, but also explores the close relationships between the Hobbys and key figures in twentieth-century history, from Texas legends such as LBJ, Sam Rayburn, and Jesse Jones, to national icons, including the Roosevelts, President Eisenhower, and the Rockefellers. Carleton's chronicle reveals the undeniable impact of the Hobbys on journalistic and political history in the United States.