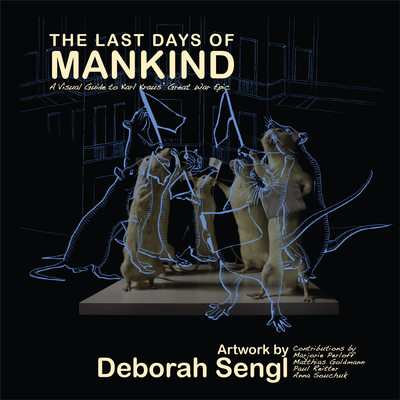 The Last Days of Mankind

The Great War drama by Viennese satirist Karl Kraus, restaged by Sengl in "stunning display" of taxidermied rat-actors, with commentary.

When the age died by its own hand, that hand was Karl Kraus'.

With critical success over the past four years, artist Deborah Sengl (b. 1974) has exhibited taxidermied rats, drawings and paintings in order to restage Karl Kraus' nearly-unperformable play The Last Days of Mankind (Die Letzten Tage der Menschheit, 1915-22). Featuring Sengl's entire installation, the DoppelHouse Press edition also includes essays that examine her ambitious dramaturgy, which condenses Kraus' ten-to-fifteen hour drama into an abridged reading of its themes: human barbarism, the role of journalism in war, the sway of popular opinion and the absurdities of nationalism. Select translations of Kraus' original provide a window to see his other "war" -- a war on the misuses of language itself.

Published in conjunction with the centenary anniversary of the Armistice, which ended The Great War but bred another soon to come, this edition of The Last Days of Mankind offers an agit-prop protest crossing the boundaries of art and spanning the knowledge of the century that has passed since Kraus penned his play. Deborah Sengl offers her stylistic model for envisioning human folly through animal actors, who become more than human, while confronting a violence particular to humankind, laced with selfishness and greed.

Matthias Goldmann is a writer and translator. He has published essays, poetry, and stories, has created and exhibited computer text animations, and has cooperated with visual artists and authors on various projects and publications including coauthoring the artist monograph Franz West: Man with a Ball (Rizzoli, 2014).
Loading...
or support indie stores by buying on