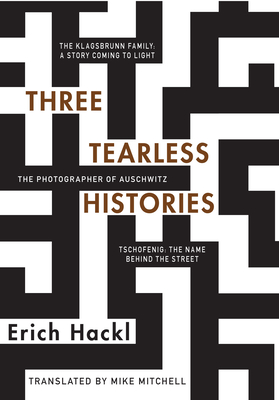 "Powerful inquiries spurred by photos--history made flesh, the untold lives of the mostly forgotten."
--Kirkus Reviews "A missionary voice of human dignity."
--World Literature Today Erich Hackl, 2017 recipient of the internationally-recognized Human Rights Award of Upper Austria and winner of multiple literature prizes, brings three little-known and inspiring biographies to light: Gisela Tschofenig's hidden life in the Austrian resistance; a fragmented interview with Wilhelm Brasse, who photographed Auschwitz inmates and saved evidence of Mengele's horrific crimes; and "the multi-generational story of the Klagsbrunns, who fled Nazism in Vienna only to find another kind of terror in fascist Brazil.

Mike Mitchell is an award-winning translator of French and German who has been active as a translator for over thirty years. He is the recipient of the Schlegel-Tieck Prize for translations of German works published in Britain, has won the British Comparative Literature Association translation competition three times, and has been shortlisted for many awards including the French-American Translation Prize, the Weidenfeld prize, the Aristeion prize, the Kurt Wolff prize, and the Crime Writers' Association Gold Dagger. In 2012 the Austrian Ministry of Education, Art and Culture awarded him a lifetime achievement award as a translator of literary works. He lives in Scotland.
Loading...
or
Not Currently Available for Direct Purchase