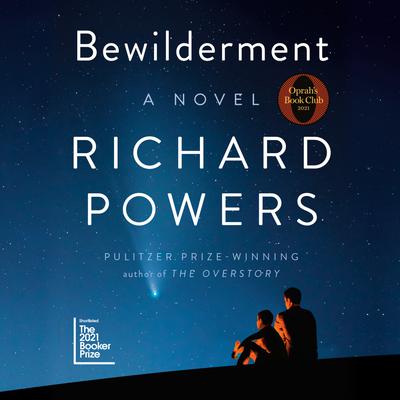 “Richard Powers is peerless when conveying the intimate and universal in family relationships. Bewilderment is tender, riveting, and true. It took my breath away.”
— Lesley Rains, City of Asylum Bookstore, Pittsburgh, PA
View the List

A heartrending new novel from the Pulitzer Prize-winning and #1 New York Times and internationally bestselling author of The Overstory.

Named one of the Most Anticipated Books of 2021 by New York, Chicago Tribune, BookPage, Literary Hub, The Millions, New Statesmen and Times of London

The astrobiologist Theo Byrne searches for life throughout the cosmos while singlehandedly raising his unusual nine-year-old son, Robin, following the death of his wife. Robin is funny, loving, and filled with plans. He thinks and feels deeply, and can spend hours painting elaborate pictures of the endangered animals he loves. He is also about to be expelled from third grade for smashing his friend in the face.

What can a father do, when the only solution offered to his troubled son is to put him on psychoactive drugs? What can he say when his boy comes to him wanting an explanation for a world that is clearly in love with its own destruction?

With its soaring descriptions of the natural world, its tantalizing visions of life beyond and its account of a father and son's ferocious love, Bewilderment marks Richard Powers's most intimate and moving novel. At its heart lies the question: How can we tell our children the truth about this beautiful, imperilled planet?

RICHARD POWERS is the author of twelve novels. His most recent, The Overstory, won the 2019 Pulitzer Prize in Fiction and the 2020 American Academy of Arts and Letters' William Dean Howells Medal for the most distinguished American work of fiction published in the last five years, and was a finalist for the Man Booker Prize. The Overstory has been on the New York Times bestseller list for 63 weeks to date, with more than one million copies in print across all formats. Powers is also the recipient of a MacArthur Fellowship and the National Book Award, among other accolades.