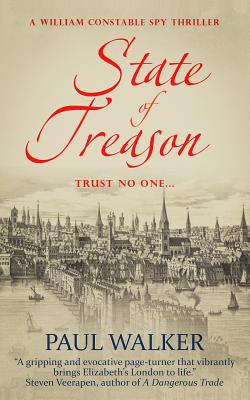 "A gripping and evocative page-turner that vibrantly brings Elizabeth's London to life." Steven Veerapen, author of A Dangerous Trade

London 1578 - a cauldron of conspiracy, intrigue and torture.

The might of Spain and the growing influence of the Catholic League in France all threaten the stability of Queen Elizabeth and her state.

William Constable, a physician and astrologer, is summoned to the presence of the Queen's spymaster, Sir Francis Walsingham. He is charged to assist a renowned Puritan, John Foxe, in uncovering the secrets of a mysterious cabinet containing an astrological chart and coded message. Together, these claim Elizabeth has a hidden, illegitimate child (an "unknowing maid") who will be declared to the masses and serve as the focus for an invasion.

Constable must uncover the identity of the plotters, unaware that he is also under suspicion.

A connection to his estranged mentor, Doctor Dee, comes under scrutiny.

Pressured into taking up a position as a court physician, Constable becomes a reluctant spy.

Do the stars and cipher speak true, or is there some other malign intent in the complex web of scheming?

Constable becomes an unwitting pawn, in a complex game of thrones and power.

State of Treason is the first in a series of Elizabethan thrillers featuring William Constable.