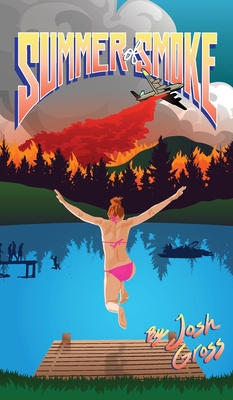 "The originality in his approach and his grip of humor writing knock the wind out of me."

When thick wildfire smoke lingers in a small Oregon town, daily life begins to more closely resemble an apocalyptic sci-fi film than summer vacation, and the locals all go a bit nuts. However, the Gilbert family just goes a bit more nuts than usual.

The father, Greg, is so depressed he barely gets out of bed, choosing instead to haunt online conspiracy forums about why the fire hasn't yet been extinguished.

The mother, Lina, tries to volunteer at various charities to alleviate her guilt over the state of the environment, but consistently ditches to smoke pot.

Emma, the daughter who just returned from college as a vegan eco-radical, spends her evenings in campaigns of petty sabotage directed at anyone over thirty for their complicity in climate change.

And the high school age son, Shannon, seeks literal escape by taking a job as trail guide to a Bigfoot seeker in the mountains beyond the smoke's reach, but finds that the constant trips in and out of the smoke begin to warp his sense of reality.

Each chapter is told from a different character's POV, weaving multiple plot threads together as the Gilbert family unravels. They are each simultaneously at war with the weather, with each other, and with their fracturing senses of self and order to the universe.

By summer's end, nothing will be the same.

" His] are the kind of soul-molesting stories that are difficult to forget, and would be a shame to miss out on."

"Sweet, merciful Christ thank you so much for something decent, delightful, original, and inventive to edit. The shit-eating grin hasn't left my face since the first page."