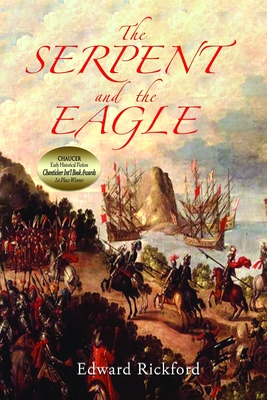 The Serpent and the Eagle

Something has come from beyond the Great Mists... Tenochtitlan, 1519. Strange, pale-skinned people have arrived on the coast of the One World. They hail from a far away land called Spain and fight for the mysterious Hernando Cort's. To confront Cort s' army would be dangerous, but inaction may be even more dangerous. The Mexica are the most powerful people in all the One World and regard the uncouth interlopers with a mixture of curiosity and distrust. Keen to discover their intentions, the Mexica send an official envoy to the coast. What they learn is most troubling. The Spanish possess weapons that have no equal... and they may have designs on Tenochtitlan. The conflict that follows will tear an entire region asunder and give birth to an empire of globe-spanning proportions. Combining the rich world-building of Sharon Kay Penman with the gripping battles sequences of Conn Iggulden, this award-winning novel draws upon modern scholarship to recount an event still unique today: the epic collision of two civilizations separated for millennia. Editorial Reviews "The epic encounter of Aztecs and conquistadors has attracted-and tested-many a novelist. The challenge is one of staying believably true to the historical tale and its Mexican setting, while at the same time offering the reader some surprises. Rickford rises to that challenge with considerable aplomb, balancing evidence with imagination, research with flights of fiction. Fueled by a complex narrative tension and a deft deployment of detail, The Serpent and the Eagle is unpredictable in all the right ways."
-Matthew Restall, Professor of Colonial Latin American history, Director of Latin American studies at Penn State, author of When Montezuma Met Cort's and Seven Myths of the Spanish Conquest "Edward Rickford knows his history. The Serpent and the Eagle is a masterpiece of historical fiction. It's filled with surprises and heart-rending characters, but it's Rickford's attention to cultural details, both native Mexica and Spanish, that puts this book one step above its competition. Plan a long weekend of reading. You're going to love this book."
Kathleen O'Neal Gear, New York Times bestselling author of People of the Canyons "A captivating, well-plotted, bicultural dramatization of the months prior to Motecuhzoma's meeting with Cort's, deftly transporting the reader 500 years back into the eyes and intimate relationships of key participants-Mesoamerican and European, emperor and counselor, conqueror and slave."
-Andrew Rowen, author of Encounters Unforeseen: 1492 Retold "Difficult to put down. Well-written, fascinating, and full of wonderfully diverse points of view "
-Zoe Saadia, author of the Pre-Aztec Trilogy and the Rise of the Aztec Series "When two cultures collide, there are always multiple versions of history. A brave and expansive look into the bygone era of exploration by the Spaniards into Aztec lands. A thinking person's novel. Fascinating "-Chanticleer Reviews "The Serpent and the Eagle is another literary text that may offer the reader exits out of the colonial wound of indignity and entrances into the enunciative reclamation of silenced historical, social, and cultural spaces."
-C.T. Mexica, Ph. D, Arizona State University "The story weaves a rich tapestry of Spanish conquistadors and native Mexica-commonly known as the Aztecs-as well as the neighboring native tribes, that transports readers to the lush jungles and grand cities of pre-Hispanic Mexico. The writing is clear and easy to read, with just enough Spanish and Nahuatl to add deep flavors without slowing the pace."
-Casey Robb, author of The Devil's Grip Grand Prize Winner in the 2018 Chaucer Book Awards Winner of the Five Star Review in the Reader's Favorite Contest Winner of the Discovered Diamond Award.