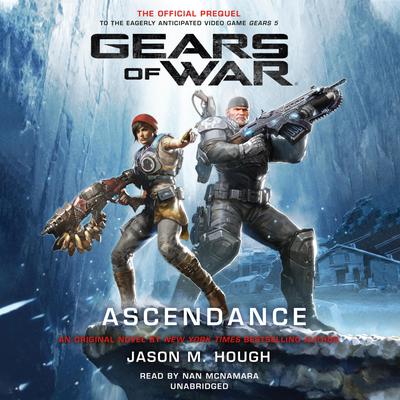 Ascendance (The Gears of War Series)

The official prequel to the action video game Gears 5, beginning immediately after Gears of War 4 and leading directly into the new game.

Following Reyna Diaz’s death at the hands of the Swarm (in Gears of War 4), Kait seals her mother’s tomb and swears revenge. As she, JD, Del, Marcus, Cole, Samantha, and Baird lick their wounds and resupply, First Minister Jinn summons them to New Ephyra, promising that the “crimes” they committed will be forgiven. Before they can rejoin the Coalition, however, Jinn demands proof of their loyalty, and of the threat of the Swarm. Promised a new command, JD and Del agree. Plagued by nightmares, Kait rebels and refuses. When she discovers that two teens from her devastated village have survived, she goes rogue and strikes out to rescue them, accompanied by Marcus Fenix. Pursued by the robotic DeeBees, Kait and Marcus search for survivors. Instead they find an overwhelming force of the enemy—and an unexpected ally. Meanwhile JD and Del lead a mission to locate the Swarm, only to be cut off from New Ephyra. Trapped and surrounded, they’re on their own. Picking up where Gears of War 4 left off, GEARS OF WAR: ASCENDANCE is the official, action-packed bridge between that game and Gears 5.

Jason M. Hough is an author of science fiction novels, including The Darwin Elevator, which was a New York Times bestseller. He was born in Illinois but grew up on the mean streets of suburban San Diego, California. In 1978, at age six, his parents took him to see Star Wars and so began a lifelong love of science fiction and all things geek. He has been a 3D artist, animator, and game designer for Metal Fatigue, Aliens vs. Predators, and others.