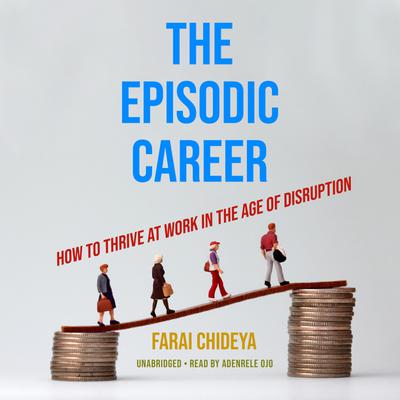 How to Thrive at Work in the Age of Disruption

Find your most rewarding place in today’s economy. Award-winning author, researcher, and analyst Farai Chideya offers a practical guide to the ways in which work in America is changing and how you can navigate today’s volatile job market.

Since the Great Recession of 2007–2009, America’s work landscape has changed dramatically. Many people experienced long-term unemployment that eroded their savings, and the globalized economy means that not just jobs but entire career tracks are created and destroyed in front of our eyes. We’re living in an age of rapid disruption where we can barely adjust to one new reality before a new new reality comes along.

So how are we supposed to live a rewarding life—working fulfilling, stable jobs that cover our monthly expenses—in such a chaotic economy?

In The Episodic Career, Farai Chideya explores the landscape of employment in America. Profiling the rich, the poor, and people from every strata in between, Chideya seeks to understand the many kinds of work we do—not just job fields, but whether we seek to build institutions or seek social change while earning money. In addition, Chideya provides a self-diagnostic tool to help you find your work/life “sweet spot.” You’ll see how different types of people have navigated their careers and forged their own paths even in times of hardship. As a young reporter at Newsweek, CNN, and ABC, Chideya realized that her working-class Baltimore childhood and factors like Ivy League education affected how people viewed her, and she takes a frank look at stereotypes, employment discrimination, and how to create healthy workplaces. Ultimately, she asks how we as a country can sustain the American Dream.

Knowledge of the workplace is power over your career. The Episodic Career provides the big-picture vision of the world economy, as well as the particulars of salary, family, health, and lifestyle that you need to thrive in a rapidly changing world.