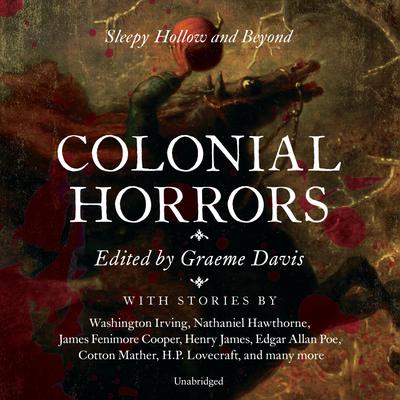 Sleepy Hollow and Beyond

This stunning anthology of classic colonial suspense fiction plunges deep into the native soil from which American horror literature first sprang. While European writers of the Gothic and bizarre evoked ruined castles and crumbling abbeys, their American counterparts looked back to the colonial era’s stifling religion, and its dark and threatening woods.

Today the best-known tale of colonial horror is Washington Irving’s The Legend of Sleepy Hollow, although Irving’s story is probably best known today from various movie versions it has inspired. Colonial horror tales of other prominent American authors—Nathaniel Hawthorne and James Fenimore Cooper among them—are overshadowed by their bestsellers, and are difficult to find in modern libraries. Many other pioneers of American horror fiction are presented afresh in this breathtaking volume for today’s public readers.

Some will have heard the names of Increase and Cotton Mather in association with the Salem witch trials, but will not have sought out their contemporary accounts of what were viewed as supernatural events. By bringing these writers to the attention of the contemporary readers, this collection will help bring their names—and their work—back from the dead.

Graeme Davis has been fascinated by horror fiction since his teens, devouring late-night reruns of the classic Universal and Hammer movies on his parents’ black-and-white TV and stripping local thrift-stores of horror titles. He began writing for tabletop role-playing games in the early 1980s, and among many other credits he helped develop Games Workshop’s blockbuster Warhammer dark-fantasy franchise and the 90s gothic hit Vampire: The Masquerade, as well as more than forty electronic games. This is his second anthology for Pegasus, following on from the 2017 collection Colonial Horrors. He lives in Lafayette, Colorado.