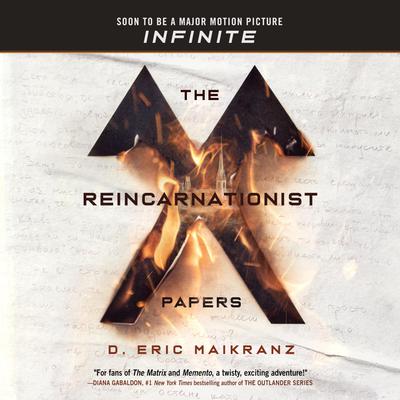 “For fans of The Matrix and Memento, a twisty, exciting adventure!”—Diana Gabaldon, #1 New York Times bestselling author of the Outlander series

The basis for the major motion picture Infinite

Discovered as three notebooks in an antique store in Rome at the turn of the millennium, The Reincarnationist Papers offers a tantalizing glimpse into the Cognomina, a secret society of people who possess total recall of their past lives.

Evan Michaels struggles with being different, with having the complete memories of two other people who lived sequentially before him. He fights loneliness and believes he is unique until he meets Poppy. She recognizes his struggle because she is like him, except that she is much older, remembering seven consecutive lives. But there is something else she must share with Evan—she is a member of the secretive Cognomina. They are, in effect, immortals—compiling experiences and skills over lifetimes into near superhuman abilities that they have used to drive history over centuries.

Poppy invites Evan into the Cognomina, but he must face their tests before entering this mysterious society as their equal.

D. Eric Maikranz has had a multitude of lives in this lifetime. As a world traveler, he was a foreign correspondent while living in Rome, translated for relief doctors during a cholera epidemic, and was once forcefully expelled from the nation of Laos. He has worked as a tour guide, a radio host, a bouncer, and as a Silicon Valley software executive. Infinite: The Reincarnationist Papers is his first novel, which has been adapted into the Paramount Pictures film Infinite, starring Mark Wahlberg.