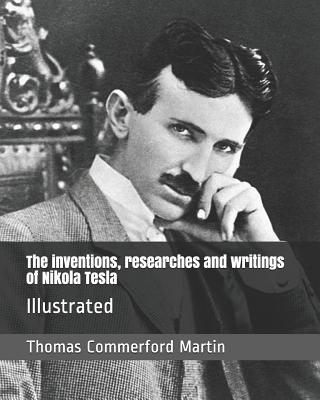 The inventions, researches and writings of Nikola Tesla

Thomas Commerford Martin (July 22, 1856 - May 17, 1924) was an American electrical engineer and editor.LifeHe was born in London, England. His father worked with Lord Kelvin and other pioneers of submarine telegraph cables, and Martin spent much time on the cable-laying ship SS Great Eastern. Educated as a theological student, Martin came to the United States in 1877. He was associated with Thomas A. Edison in his work in 1877-1879 and thereafter was engaged in editorial work. From 1883 to 1909 he served as editor of the Electrical World, after 1909 was executive secretary of the National Electric Light Association, and in 1900-1911 was a special agent of the United States Census Office. At various times he lectured at the Royal Institution of Engineers, London, the Paris Soci t Internationale des Electriciens, the University of Nebraska, and Columbia University. He was a founding member of the American Institute of Electrical Engineers, and served as president in 1887-1888.PublicationsThe Electric Motor and Its Applications (1887; third edition, 1888), with Joseph WetzlerEdison, His Life and Inventions, (1910), with Frank Lewis DryerThe Inventions, Researches, and Writings of Nikola Tesla (1893; third edition, 1894)The Story of Electricity, 1919 (ed) with Stephen Leidy ColesReminiscences Of Pioneer Days In St. Paul with Frank Moore, The Inventions, Researches and Writings of Nikola Tesla is a book compiled and edited by Thomas Commerford Martin detailing the work of Nikola Tesla up to 1893.The book is a comprehensive compilation of Tesla's early work with many illustrations. OverviewWritten in 1893, the book is a record of Tesla's pioneering activities, research, and works. Tesla is recognized as one of the foremost electrical researchers and inventors. At the time of publication, the book was the "bible" of every electrical engineer practicing the profession.The book contains Forty-three chapters, most of them on different areas of Tesla's research and inventions by Tesla. The first chapter is a brief biography while three chapters are transcripts of important lectures and one covers his section of Westinghouse's exhibit at the Chicago World's FairMartin stated that, "No attempt whatever has been made here to emphasize the importance of his researches and discoveries".The ideas and inventions are conveyed in their own way, determining by their own place by intrinsic merit. But with the fact that Tesla blazed a path that electrical development would later follow for years to come, the compiler of the book endeavored to bring together all of Tesla's work up to that point in Tesla's life.Aside from indicating the range of his thought and originality of his mind, the book has historical value because it describes the scope of Tesla's early inventions.