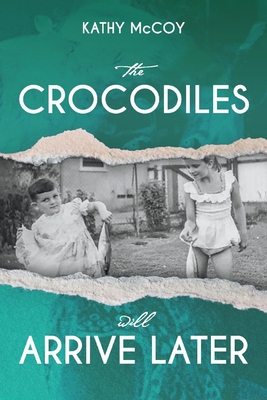 The Crocodiles Will Arrive Later

Kathy McCoy had three major fears: first, that she would grow up to become a suburban housewife with no power of her own; second, nuclear annihilation; third, that her father would kill her. One wasn't out of the question; her alcoholic, mentally ill father threatened his children's lives on a daily basis. Her dad called his explosive mood swings 'crocodiles,' he feared they would devour him as they had his mother. He wasn't the only one.

A memoir of horror and humor, "The Crocodiles Will Arrive Later" tells the story of growing up in mid-century suburban Los Angeles. It is a story of hope and learning how to let go of a painful past to create a very different future.

Kathy McCoy is an award-winning author, journalist, blogger and podcaster. She is also a psychotherapist specializing in work with those struggling to overcome childhood trauma and dysfunction. She has written sixteen previous books including "The Teenage Body Book," winner of the American Library Association's "Best Book for Young Adults" award and the critically acclaimed "We Don't Talk Anymore: Healing After Parents and Their Adult Children Become Estranged." She has written for many national magazines and has been a guest on a number national television shows including multiple appearances on "The Today Show" and "Oprah." She is a contributing writer and blogger for PsychologyToday.com. Her own blog and podcast can be accessed through her website, drkathymccoy.com. Her podcast "Living Fully with Dr. Kathy McCoy" is available on iTunes, Stitcher Radio and Podcastpedia. She received her journalism degrees from Northwestern University, her Ph.D. in Human Behavior from Pacific Western University and her M.A. in Clinical Psychology from Antioch University's Los Angeles campus. She lives in rural Arizona with her husband Bob Stover and four pampered cats.Elizabeth C. McCoy, who contributed the poetry to this memoir, was Kathy McCoy's beloved Aunt Molly. She was an award winning poet, wrote for a number of television shows and was a civilian speechwriter for The Strategic Air Command. She received her B.A. and M.A. degrees in English from UCLA. She died in 2004, leaving one last poem, "Waiting", on her desk. That poem (and a number of others she composed to entertain her nieces and nephew) is included in this book.
Loading...
or
Not Currently Available for Direct Purchase