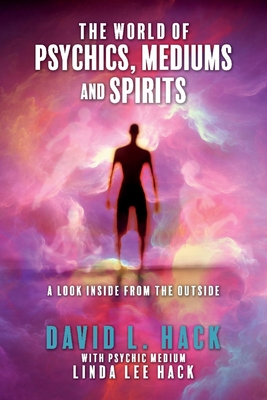 The World of Psychics, Mediums and Spirits

A Look Inside From the Outside

The title of this book The World of Psychics, Mediums and Spirits – A Look Inside from the Outside obviously refers to me as the person looking in from the outside and Linda Lee being inside. However, the word "world" requires a little elaboration. The first connotation which might come to mind is the planet earth depicted by a sphere setting on a stand upon with a map of the continents and oceans is superimposed. Or, perhaps, what is visualized is a ball representing the earth rotating on its axis with other planets revolving around the sun. That is not what is meant in this title alone. Rather, a broader sense of the word is also intended. Consider the words "world of psychics, mediums and spirits" as being a collective of nouns referring to a realm or whole area of interest, such as the "world of medicine" or "world of science." Psychics and mediums, as we refer to them here, are humans living on our planet earth. Spirits, however, may be anywhere in our planetary system, within our "milky way" universe among its millions of stars and associated planets. Or, they may be among the countless stars, planets, and universes beyond our universe, and whatever may be further beyond all of that.

There are several levels of popular awareness of what psychics, mediums and spirits are and their interaction with each other. These levels may be generally categorized as follows:

1. None.
2. Heard about it, do not believe it, it is nonsense.
3. Heard about it, but never looked into it.
4. Curious, more information would help satisfy my curiosity.
5. Skeptical, but afraid there is some substance to it.
6. Have some knowledge but need more information to fully appreciate its meaning for me.
7. Lots of experience with psychics and mediums, but what else is there to it?

I was born on July 22, 1933 in New Jersey. My father, Louis Hack, and my mother, Alice McCoy, were neighbors and childhood sweethearts in a small suburb of St. Louis, Missouri where they married. Subsequently they relocated to New Jersey, a move associated with my father's employment. Three years prior to my birth, my sister, Shirley Hack, was born. Our parents were hard working and best described as middle class. Our mother finished high school, but my father only completed the eleventh grade before leaving school for gainful employment. There were some tough financial times for our family, especially in the years after the great depression of 1929 and during World War II. Nonetheless, our parents never lost sight of their goal that my sister and I would have college educations they were never privileged to have. My sister and I graduated from high school, and with considerable sacrifice on their part, our parents' goal was achieved.

My sister graduated from the Women's College of the University of North Carolina with our parents in attendance. Subsequently, she married and had three sons. Unfortunately, Shirley passed away very prematurely dealing a severe emotional blow to our respective families.

I graduated from Johns Hopkins University with a Bachelor of Engineering Degree and from Rutgers University with a Bachelor of Laws Degree. My parents were in attendance for both graduations. In between college and law school I was employed as an engineer and had some military experience with the U.S. Army Corps of Engineers. I practiced law in New Jersey for 38 years primarily as a trial attorney while continuing as an officer in the reserve component of the Army Corps of Engineers for a good part of that time. Along the way two daughters were included in my life's journey. I retired from practicing law at the end of 1996 and moved to Naples, Florida. Armed with a Coast Guard Small Boat Captain's License, my intent was to catch all the fish that swam in the surrounding waters. Not included in the aforesaid intent was meeting my wife Linda Lee in Naples and marrying her twenty three plus years ago. Linda Lee, as she is more well-known in the world of psychics, mediums, and the spirit world, was born on February 7, 1949. Her mother, Mary Anna Williams, was from suburban San Diego, California. Her father, Jimmy Webb, was from Stover, Missouri. Jimmy enlisted in the U. S. Army in March of 1941 prior to the entry of the United States into World War II following the Japanese attack on Pearl Harbor on December 7, 1941. His regiment was stationed in Panama guarding the Panama Canal. He served throughout the war and was honorably discharged as a sergeant at the conclusion of the war in 1945. Jimmy met Mary Anna while on leave and they were married in 1944. Upon Jimmy's discharge from the army, Jimmy and Mary Anna Webb established their home outside of San Diego, California.

Five children were born of the marriage, including Linda Lee. All the children left home at early ages and embarked on their individual paths through adulthood. Linda Lee's path included three children of her own, several residences across the country and becoming Linda Lee Hack in Naples, Florida.

Linda Lee's emergence as a psychic, medium, channeler of spirits, as well as chronicler, developer, advocate, and integrator of light language as a communicative skill set for psychics, is detailed in later chapters of this book. Linda Lee is an author in her own right, has participated in many programs and seminars as a principal speaker in her field, and she has many clients in the United States and numerous countries around the world.
Loading...
or support indie stores by buying on