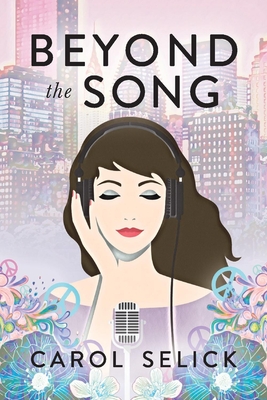 Beyond the Song is an autobiographical novel based on the author's coming of age in the 'sixties and early 'seventies. A singer-songwriter like her alter-ego Carol Marks, Carol Selick begins each chapter with lyrics she wrote and still performs today. Taken together, the songs introduce the themes of her story and trace the development of her character as she rebels against her strict suburban upbringing to join the counter-culture in hopes of fulfilling her dream of making it in the music business.
The narrator relates her tale in a warm, vulnerable, and irrepressibly zany voice as Carol goes to school in Washington DC, drops out to take a pilgrimage to Berkeley, and eventually winds up living in New York in pursuit of making it in the music business. Torn between romance and career, she continually wavers.
Her quest for freedom lands her in a series of dangerous situations and narrow escapes: she hitchhikes in California at the time of the Manson murders, attends anti-war demonstrations that turn violent, and is nearly arrested when her boyfriend is nabbed in a drug raid.
Along the way, the narrator also meets two important guides who help her sort her priorities, take herself seriously, and develop her considerable talents: Rose, a pioneering black woman songwriter based on hall-of-famer Rose Marie McCoy, Carol's real-life mentor; and Bruce Pasternak, a fictionalized psychoanalyst who helps her establish the self-assurance to stand on her own two feet at a time when female singer-songwriters had few role models. All inform the heroine's lyrics and narrative voice as she gradually learns to believe in herself, discipline her talent, and turn her heartbreak into song.

Singer-songwriter Carol Selick performs a repertoire of jazz, rhythm and blues, pop, and her own work, and appears as a vocalist with her husband, jazz trumpeter and vocalist Gordon James. A gifted songwriter, she partnered with Hall-of-Famer Rose Marie McCoy, a songwriter for Nat King Cole, Louis Jordan, Maxine Brown, Ike & Tina Turner, and Elvis Presley, and she co-founded and directed The New Jersey Garden State Opry and the New Jersey Children's Opry, where she wrote and performed original songs. She holds a degree in Early Childhood Education and Music from Rutgers, and taught piano and voice for many years. Her recordings, Life is Believing in You and Just Gonna Think About Today, feature a mix of standards and originals, and she performs the bluesy vocals on James's 2019 release, Come On Down, praised in Blues Blast as "piping-hot New Orleans fare, satisfying and spicy with just the right amount of sweet dessert!"
Visit her at: carolselickmusic.com
Loading...
or
Not Currently Available for Direct Purchase