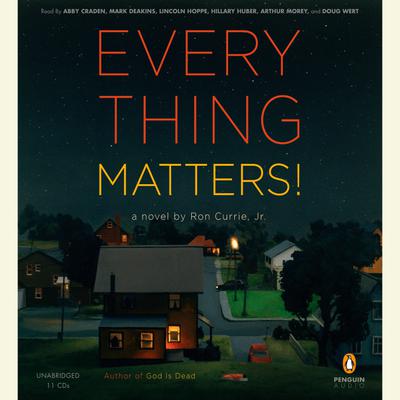 In infancy, Junior Thibodeaux is encoded with a prophesy: a comet will obliterate life on Earth in thirty-six years. Alone in this knowledge, he comes of age in rural Maine grappling with the question: Does anything I do matter? While the voice that has accompanied him since conception appraises his choices, Junior's loved ones emerge with parallel stories-his anxious mother; his brother, a cocaine addict turned pro-baseball phenomenon; his exalted father, whose own mortality summons Junior's best and worst instincts; and Amy, the love of Junior's life and a North Star to his journey through romance and heartbreak, drug-addled despair, and superheroic feats that could save humanity. While our recognizable world is transformed into a bizarre nation at endgame, where government agents conspire in subterranean bunkers, preparing citizens for emigration from a doomed planet, Junior's final triumph confounds all expectation, building to an astonishing and deeply moving resolution. Ron Currie, Jr., gets to the heart of character, and the voices who narrate this uniquely American tour de force leave an indelible, exhilarating impression.