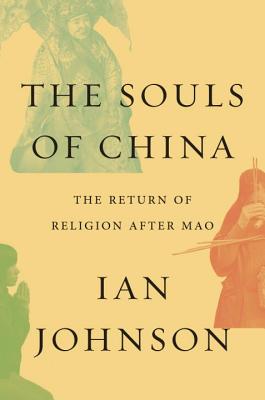 The Souls of China

The Return of Religion After Mao

From the Pulitzer Prize–winning journalist, a revelatory portrait of religion in China today—its history, the spiritual traditions of its Eastern and Western faiths, and the ways in which it is influencing China’s future.

The Souls of China tells the story of one of the world’s great spiritual revivals.  Following a century of violent anti-religious campaigns, China is now filled with new temples, churches, and mosques—as well as cults, sects, and politicians trying to harness religion for their own ends. Driving this explosion of faith is uncertainty—over what it means to be Chinese and how to live an ethical life in a country that discarded traditional morality a century ago and is searching for new guideposts.

Ian Johnson first visited China in 1984; in the 1990s he helped run a charity to rebuild Daoist temples, and in 2001 he won a Pulitzer Prize for his coverage of the suppression of the Falun Gong spiritual movement. While researching this book, he lived for extended periods with underground church members, rural Daoists, and Buddhist pilgrims. Along the way, he learned esoteric meditation techniques, visited a nonagenarian Confucian sage, and befriended government propagandists as they fashioned a remarkable embrace of traditional values. He has distilled these experiences into a cycle of festivals, births, deaths, detentions, and struggle—a great awakening of faith that is shaping the soul of the world’s newest superpower.

Praise For The Souls of China: The Return of Religion After Mao…

"Ian Johnson has long been a resourceful and bracing guide to the biggest national transformation of modern history. In The Souls of China he masterfully opens up a little explored realm: how the quest for religion and spirituality drives hundreds of millions of Chinese."  —Pankaj Mishra, author of Age of Anger: A History of the Present

“The Souls of China is a rich, informative, and timely book, which explores a major aspect of Chinese life. Ian Johnson carries erudition lightly and describes the people and events with deep insights and personal involvement. Section by section, the writing shows long-term dedication and meticulous research. At heart this is also a personal book, full of feelings and exuberance. It’s a tremendous accomplishment.” —Ha Jin, author of War Trash, A Free Life, and the National Book Award-winning Waiting

“The Souls of China is a marvel of reportage. For more than five years, Ian Johnson travelled all around China to observe rituals that few outsiders ever witness: funerals and temple fairs, fortune-telling and internal alchemy, Daoist cultivation exercises and underground Christian church services. Johnson writes about Chinese believers with detail and insight, but also with great heart – their stories are often inspiring and moving. At a time when most China books focus on politics or economics, this is the best exploration of the cultural and moral life of everyday citizens.” —Peter Hessler, author of River Town: Two Years of the Yangtze

“On one level Ian Johnson’s book is about sages and spiritual pursuits, but it also embodies critical insights into Chinese society and its looming existential concerns. His engaging stories reflect a deep understanding of Chinese traditional religions: Confucianism, Taoism and Buddhism, as well as the rebellious groups and sects popular among those on the bottom rung of society. I wonder if I can attribute such knowledge and insights to the author’s deep roots in China? Since the 1980s he has spent most of his time there, traversing the countryside and the city streets, calling on the impoverished and downtrodden, and immersing himself in the lives of ordinary folks. His tripartite masterpiece Wild Grass and his newest book, The Souls of China, are the most remarkable works to come from a western author in the past two decades.” —Liao Yiwu, exiled Chinese author of God is Red: The Secret Story of How Christianity Survived and Flourished in Communist China, The Corpsewalker: Real Life Stories, China from the Bottom Up, and For A Song and a Hundred Songs: A Poet’s Journey through a Chinese Prison.

“The great Chinese writer Lu Xun once wrote that when many men pass along the same way, a new road is made. The Souls of China shows us how the Chinese people, some with heroic steps and others with hesitant ones, are making a new road for Chinese religion in the twenty-first century. The reappearance and flourishing of religion is perhaps the most surprising aspect of the dramatic changes in China in recent decades. With great sensitivity Ian Johnson guides us on a tour of the rituals, festivals, and above all some of the remarkable characters who make up this new Chinese religious world. This is a beautiful, moving and insightful book.” —Michael Szonyi, author of Cold War Island and director, Harvard University's Fairbank Center for Chinese Studies

“Ian Johnson breaks new ground with a brilliant approach,  mixing theoretical explorations with real life vignettes from a convincing insider-outsider-combined perspective, making them commenting each other, illuminating in the same way as through the traditional Chinese criticism paradigm of  ‘I commentate the six classics which commentate me.’ The Souls of China is a must read for an understanding of China.” —Qiu Xiaolong, author of The Inspector Chen Novels

“This entrancing and engaging book challenges the modern assumption that religion is a thing of the past; on the contrary, the dramatic resurgence of spirituality in China, after a century of violent persecution, suggests that it is an irrepressible force that may in some sense be essential to humanity.” —Karen Armstrong, author of Fields of Blood

“Ian Johnson peels back the gleaming surfaces of modern China to reveal a sacred landscape underneath—a web of ritual and tradition, myth and faith—that has sustained the Chinese for centuries and is doing so anew. Over a year in the traditional calendar, Johnson takes us on an extraordinarily rich and intimate journey—from pilgrimages on holy mountains, to the thriving Protestant congregations in the nation’s booming cities, to the village farmhouses where Daoist funerals are held and fortunes told. Johnson shows us what is really in Chinese souls and hearts. This vividly written, deeply researched book will be the primary work about religious faith in China for years to come.” —Leslie T. Chang, author of Factory Girls: From Village to City in a Changing China

“Mr. Johnson has long delved into the Chinese soul, winning a Pulitzer prize in 2001 for his reporting in the Wall Street Journal on the party’s suppression of Falun Gong, a spiritual movement. He compares the religious revival with the Great Awakenings in America in the 18th and 19th centuries, when a stirring of popular Christian belief led to major social and political change….A fascinating panorama.” —The Economist

“Compelling…. Johnson’s fundamental aim in this book is to make sense of this great spiritual awakening, which he does with compassion and insight. He also wisely avoids offering any facile or sweeping explanations for a phenomenon that is clearly not unique to China. Rather, by focusing on four different religious groups that cut across regional and socioeconomic divides—and by following them all through a full lunar year—he is able to situate the particular Chinese experience within larger realities that define our current world….Wonderful.” —Los Angeles Review of Books

“Chinese society is not religious. At least that’s the conventional wisdom, which argues that there is no place for religion in a China consumed by materialist capitalism under the control of a dictatorial government. But in The Souls of China, journalist Ian Johnson brilliantly demonstrates that the conventional wisdom is wrong….Vivid and moving.” —The Washington Post

“A masterpiece of observation and empathy….What Johnson brilliantly describes in this book is how ordinary people, seeking faith to give meaning to their lives, are not waiting for Xi to lead them to his version of the promised land. Daoists, Buddhists, and Confucians are allowed to rebuild temples and memories of past practices persist, enabling believers to return to them.” —The New York Review of Books

“[A] fascinating odyssey through contemporary Chinese religion….Johnson succeeds in having produced a nuanced group portrait of Chinese citizens striving for non-material answers in an era of frenetic materialism.” —The Guardian

“Fascinating….Johnson, a Pulitzer Prize-winning journalist, guides us on his exploration of the resurgence in religious belief by using a map grounded in tradition. He frames his book around the Chinese lunar calendar seasons such as The Awakening of the Insects or The Hungry Ghosts Festival. It is a charming conceit that provides a living link to ancient beliefs. En route, he introduces us to a rich cast of well-drawn characters who bring the pages alive. Their faith brings a personal dimension to this meticulously researched book, six years in the making….A deeply knowledgeable, eminently readable and important book that reveals a side of China that foreigners rarely explore. [Johnson] is an excellent and companionable guide.” —The Christian Science Monitor

“Pulitzer Prize-winning journalist Johnson delves into the lives of several families and communities as they live out varying faith traditions in China. Along the way, he provides useful history lessons on how religion in China has come to be what it is today. In touching, descriptive prose, Johnson brings his subjects to life amid a colorful backdrop….Throughout this worthwhile study, the author touches on a wide array of issues related to faith in Chinese culture, including the advent of the technology age, urbanization, respect for the dead, the role of family, and the ever looming communist state….Engaging, timely, and humane.” —Kirkus Reviews *starred review*

“Through interviews conducted with a wide variety of practitioners, Johnson paints a vivid picture of the diversity of Chinese religious life….He provides a fascinating account of how traditional activities recovered after enduring severe repression during China’s Cultural Revolution (1966-76). An excellent work that is highly recommended for readers interested in Chinese culture or religion.” —Library Journal *starred review*

“Johnson’s writing is compelling and lyrical, and his research strikes a fluid balance between the political implications of a resurgence of spirituality in a society that for so long suppressed any official religious presence, and the implications for daily life and society found in the complex and human details of this new populist cultural development, including funerals, births, marriages, and applications of government propaganda. The book should appeal to anyone interested in China, and to readers interested in how people use religion and spirituality to forge relationships, build cultures, and make sense of their lives.” —Publishers Weekly

“Johnson practices what might be called ‘slow reporting’: a form of patient watching, listening, and asking that produces deep insight into China’s multifaceted religious revival. He sits with a Christian prayer group, practices Taoist meditation, participates in a raucous yet spiritual mountain pilgrimage, and attends burial rites. As a curious foreigner, he is welcomed by Chinese hosts who graciously instruct him on their idiosyncratic beliefs. His deft descriptions of these encounters distill the results of broad scholarly research with gentle humor and quiet emotion.” —Foreign Affairs

“Johnson…is at his best, showcasing his mastery of immersive reporting as he travels with Buddhist pilgrims and lives with Chinese Christians….[A] peerless book.” —Foreign Policy

“Wonderful….For anyone interested in looking beyond the headlines to understand the complexity of religious life in China today, The Souls of China is a must-read.” —The Gospel Coalition

IAN JOHNSON is a regular contributor to The New York Review of Books and The New York Times, and his work has also appeared in The New Yorker and National Geographic. He is an advising editor for the Journal of Asian Studies, and teaches a course on religion in Beijing. He is the author of two other books that also focus on the intersection of politics and religion: Wild Grass: Three Stories of Change in China, and A Mosque in Munich: Nazis, the CIA, and the Rise of the Muslim Brotherhood in the West. He lives in Beijing.
Loading...
or
Not Currently Available for Direct Purchase