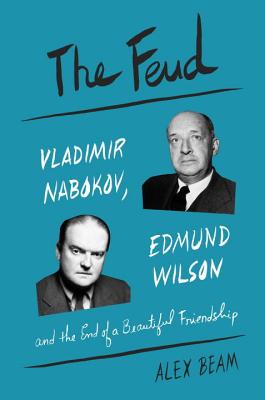 Vladimir Nabokov, Edmund Wilson, and the End of a Beautiful Friendship

The Feud is the deliciously ironic (and sad) tale of how two literary giants destroyed their friendship in a fit of mutual pique and egomania.

In 1940, Edmund Wilson was the undisputed big dog of American letters. Vladimir Nabokov was a near-penniless Russian exile seeking asylum in the States. Wilson became a mentor to Nabokov, introducing him to every editor of note, assigning him book reviews for The New Republic, engineering a Guggenheim Fellowship. Their intimate friendship blossomed over a shared interest in all things Russian, ruffled a bit by political disagreements. But then came the worldwide best-selling novel Lolita, and the tables were turned. Suddenly Nabokov was the big (and very rich) dog. The feud finally erupted in full when Nabokov published his hugely footnoted and virtually unreadable literal translation of Pushkin’s famously untranslatable verse novel, Eugene Onegin. Wilson attacked his friend’s translation with hammer and tongs in The New York Review of Books. Nabokov counterattacked. Back and forth the increasingly aggressive letters flew, until the narcissism of small differences reduced their friendship to ashes.

Alex Beam has fashioned this clash of literary titans into a delightful and irresistible book—a comic contretemps of a very high order and a poignant demonstration of the fragility of even the deepest of friendships.

Praise For The Feud: Vladimir Nabokov, Edmund Wilson, and the End of a Beautiful Friendship…

"Alex Beam, in his new literary biography, The Feud: Vladimir Nabokov, Edmund Wilson and the End of a Beautiful Friendship. . . gives us a brief but detailed sketch of how two erudite men of letters went from intimate confraternity to bitter enmity in the span of a few decades. . . Literary biographies remind us that even the gods are human ⎻⎻ primates, like the rest of us, just a few chromosomes away from the sapajous."
⎻⎻ Tyler Malone, The Los Angeles Times


"The Feud: Vladimir Nabokov, Edmund Wilson and the End of a Beautiful Friendship is a relentlessly absorbing account of a sorry saga which stemmed from a difference of opinion, accelerated into a battle of egos and culminated in bitter loss for both adversaries. . .Was Wilson too scathing? Was Nabokov too thin-skinned? [Alex] Beam leaves those questions for his reader to decide. What he does, though, throughout his compelling book, is strikingly portray two brilliant but flawed men, and remind us that a rock-solid friendship can be eroded or destroyed by the combined forces of ego, envy and wounded pride."
⎻⎻ Malcolm Forbes, The National

"Beam wears his learning lightly. He has a keen sense of the absurd and is mischievous but not malicious in exposing the foibles of these frenemies. He also, while he’s at it, has some Nabokovian fun as he laces his narrative with wordplay and faux-scholarly flourishes...his book mostly leaves you asking yourself how prideful and pig headed even the smartest men can be. If there’s a broader application to The Feud, it stems from that question, which doesn’t bode well for any of us."
⎻⎻ Michael Upchurch, The Boston Globe

"Throughout, [Beam] is not only an amiable guide, but also proves adept concerning Russian history and literature, and Pushkin’s famous novel. (Beam was the Globe’s Moscow correspondent earlier in his career.) Reading The Feud, we may laugh at these famous writers and their prideful foibles, but it also forces us to think how far we’ve come and how much things have changed. Today, the idea of a public squabble over a 19th century Russian text is sort of quaint. But at any point in history, Beam shows us, how quickly such contretemps can turn silly
⎻⎻  John Winters, WBUR.org

"Literary feuds can become the stuff of legend. Often sparked by equal measures of arrogance and insecurity, and fueled by wit and vitriol, the best provide great sideline entertainment for fans and detractors alike...Beam—a former Moscow correspondent and current columnist for The Boston Globe— makes clear in this slender, yet thoroughly researched and sprightly told account of the events, the rivalry was long percolating...What will interest readers, though, are the well-drawn, often unflattering portraits of two prickly, self-assured giants of 20th-century-literature, engaged in childish, if sharp-witted, verbal fisticuffs."
⎻⎻ Robert Weibezahl, BookPage

One of Publishers Weekly's Best Books of 2016

"Beam's book evokes the strangely satisfying sensation of witnessing smart people bickering over seemingly small matters. It also provides a fascinating behind-the-scenes glimpse, full of anecdotal ephemera, of how Wilson and Nabokov interacted and why. But the more lasting sensation is the bittersweetness of this portrait of a fallen friendship—at its height, Nabokov wrote to Wilson, 'You are one of the few people in the world whom I keenly miss when I do not see them.' "
⎻⎻ Publishers Weekly, starred review

"The almost legendary tale of Vladimir Nabokov and Edmund Wilson's very public literary debate is told with great sympathy and skill by Beam... On one level it is a story of two titans of modern American literature coming to verbal blows over vocabulary and syntax, but more importantly, and more universally, it is the story of a generous friendship collapsing under the weight of reputation and the desperate need to have the final say. Beam is a natural storyteller and lucid scholar... The account of these two apparent geniuses devolving into bickering schoolchildren is endlessly readable and bittersweetly comic."
⎻⎻ Library Journal, starred review

“A shrewd, affectionate, and wildly engrossing account of one of the greatest and most ridiculous smackdowns in literary history. There came a time, in the feud between Nabokov and Wilson, when the former effected the removal from his books of blurbs written by the latter. Among the many delights of Beam's telling of the tale is his unerring acuity, in knowing the nonsense for nonsense, and the heartbreak for misery.”
⎻⎻ Jill Lepore

“Think Mailer versus Vidal meets Wittgenstein’s Poker—two balmy over-clever protagonists brought to splenetic life again by some top-grade research and writing.”
—Richard Cohen, author of How to Write Like Tolstoy

ALEX BEAM has been a columnist for The Boston Globe since 1987. He previously served as the Moscow bureau chief for Business Week. He is the author of three works of nonfiction: American Crucifixion, Gracefully Insane, and A Great Idea at the Time; the latter two were New York Times Notable Books. Beam has also written for The Atlantic, Slate, and Forbes/FYI. He lives in Newton, Massachusetts.
Loading...
or
Not Currently Available for Direct Purchase