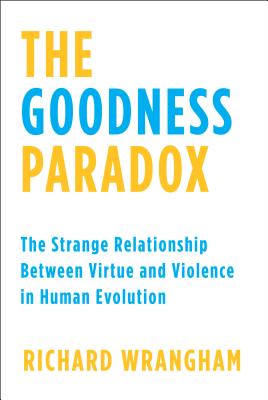 The Strange Relationship Between Virtue and Violence in Human Evolution

“A fascinating new analysis of human violence, filled with fresh ideas and gripping evidence from our primate cousins, historical forebears, and contemporary neighbors.”
—Steven Pinker, author of The Better Angels of Our Nature

We Homo sapiens can be the nicest of species and also the nastiest. What occurred during human evolution to account for this paradox? What are the two kinds of aggression that primates are prone to, and why did each evolve separately? How does the intensity of violence among humans compare with the aggressive behavior of other primates? How did humans domesticate themselves? And how were the acquisition of language and the practice of capital punishment determining factors in the rise of culture and civilization?

Authoritative, provocative, and engaging, The Goodness Paradox offers a startlingly original theory of how, in the last 250 million years, humankind became an increasingly peaceful species in daily interactions even as its capacity for coolly planned and devastating violence remains undiminished. In tracing the evolutionary histories of reactive and proactive aggression, biological anthropologist Richard Wrangham forcefully and persuasively argues for the necessity of social tolerance and the control of savage divisiveness still haunting us today.

Praise For The Goodness Paradox: The Strange Relationship Between Virtue and Violence in Human Evolution…

“Highly original . . . complex and ambitious . . . A story about the origins of morality that begins” hundreds of thousands of years before any creature had a sense of right and wrong, or even a sense of self . . . There is something impressive, even moving, about the book’s sifting, weighing, and fitting together of evidence from a half-dozen continents, a dozen disciplines, several dozen species, and two million years into a large and intricate structure. There is also a lesson: evolution is much less relevant to our growth than moral imagination.
—George Scialabba, The New Yorker

“Wrangham probes the deep evolutionary history of human aggression . . . this book [is] essential reading as geneticists start to unwrap the package of genes that responded to domestication, which may give hints about our own evolutionary history.”
—The Wall Street Journal

“Fascinating . . . The Goodness Paradox pieces together findings from anthropology, history, and biology to reconstruct a vivid and comprehensive history of how humans evolved into domesticated creatures . . . presents a complex but convincing perspective on how good and evil may have come to co-exist in our unique species.”
—The Washington Post

“[Wrangham] deploys fascinating facts of natural history and genetics as he enters a debate staked out centuries ago by Thomas Hobbes and Jean-Jacques Rousseau (among other philosophers), and still very much alive today: how to understand the conjunction of fierce aggression and cooperative behavior in humans . . . This latest version[of human evolution] is bound to provoke controversy, but that’s what bold theorizing is supposed to do. And Wrangham is nothing if not bold as he puts the paradox in his title to use. In his telling, the dark side of protohuman nature was enlisted in the evolution of communal harmony . . . Wrangham has highlighted a puzzle at the core of human evolution, and delivered a reminder of the double-edged nature of our virtues and vices.”
—The Atlantic

“A work accessible to those outside the scientific field, offering a great deal of information.”
—Library Journal

“Based on Richard Wrangham’s path-breaking work and on many riveting examples, this magnificent and profound book shows how our violent, even murderous, impulses actually shaped our species to be kind and cooperative, progressively shaping our evolutionary trajectory, our moral expectations, and our genes.”
—Nicholas A. Christakis, Sterling Professor of Social and Natural Science, Yale University

“A brilliant analysis of the role of aggression in our evolutionary history.”
—Jane Goodall, author of In the Shadow of Man

“Richard Wrangham has written a brilliant and honest book about humanity’s central contradiction: that we are capable of mass murder but live in societies with almost no violence. No other species straddles such a wide gap, and the reasons are staggeringly obvious once Wrangham lays them out in his calm, learned prose. This book is science writing at its best: lucid, rational and yet deeply concerned with humanity.”
—Sebastian Junger, author of Tribe

“Wrangham has been the most original and influential interpreter of ecological and evolutionary factors in the origin of our species. In The Goodness Paradox he extends his evidence and reasoning into yet another fundamental human trait.”
—Edward O. Wilson, University Research Professor Emeritus, Harvard University

“Nobody knows more, thinks deeper, or writes better about the evolution of modern human beings than Richard Wrangham. Here he reveals a rich and satisfying story about the self-domestication of our species, drawing upon remarkable observations and experiments.”
—Matt Ridley, author of The Evolution of Everything

“In this revolutionary, illuminating, and dazzling book, Wrangham provides the first compelling explanation for how and why humans can be so cooperative, kind, and compassionate, yet simultaneously so brutal, aggressive, and cruel. His brilliant self-domestication hypothesis will transform your views of what it means to be human.”
—Daniel E. Lieberman, author of The Story of the Human Body

“This will prove to be one of the most important publications of our time. Fully supported scientific information from many directions leads us to a new and compelling analysis of our evolutionary history. Every page is fascinating, every revelation is unforgettable. It will change how we see ourselves, our past, and our future.”
—Elizabeth Marshall Thomas, author of The Hidden Life of Dogs

“This is the most thought-provoking book I have read in years. In clear, elegant prose, drawing on riveting data and vivid scenes gathered from species all over the world, renowned anthropologist Richard Wrangham examines the issues most central to human morality. The Goodness Paradox is a breakthrough that deserves careful reading, thoughtful consideration, and lively debate among all those who care about our evolutionary history and the future of human morality.”
—Sy Montgomery, author of How to Be a Good Creature

RICHARD WRANGHAM is Ruth B. Moore Professor of Biological Anthropology, Harvard University. He is the author of Catching Fire: How Cooking Made Us Human and Demonic Males: Apes and the Origins of Human Violence (with Dale Peterson). Wrangham has studied wild chimpanzees in Uganda since 1987. He has received a MacArthur Foundation fellowship and is a fellow of the American Academy of Arts and Sciences and of the British Academy.
Loading...
or
Not Currently Available for Direct Purchase